Arsenal take on Crystal Palace at Selhurst Park on Sunday. Here is the side Gooner Mac thinks Unai Emery will select for the game:

Arsenal will be keen to extend their winning run to 12 games with another victory when they take on Crystal Palace at Selhurst Park on Sunday. Here is the side Gooner Mac thinks Unai Emery will select for the game:

Goalkeeper: Petr Cech is back in contention after recovering from a hamstring injury. The 36-year-old was Emery’s first choice in the Premier League this season before his injury but Bernd Leno has performed extremely well during Cech’s absence so I think it would be harsh to drop the German this weekend.

Defence: Sokratis made a successful return to the defence on Thursday after overcoming an ankle injury so I expect the Greek international to keep his place in the back four. Rob Holding has done well enough in recent weeks but I think Shkodran Mustafi will be recalled to line-up alongside Sokratis on Sunday.

Hector Bellerin is certain to get a recall at right-back after being rested against Sporting Lisbon but it will be interesting to see what happens on the opposite side of the defence. Granit Xhaka was tried out at left-back on Thursday as Nacho Monreal and Sead Kolasinac were missing with hamstring injuries. The pair will be handed late fitness test but neither injury is too serious so hopefully at least one will be passed fit.

Midfield: Matteo Guendouzi was excellent against Sporting Lisbon and will feel unfortunate to be dropped on Sunday but I think we’ll see Lucas Torreira recalled in the middle of the park. Mohamed Elneny failed to take his chance last time out so he’ll make way with Xhaka restored to his usual central midfield position.

Attack: Aaron Ramsey wasn’t at his best against Sporting and I expect the Welshman will make way on Sunday with Mesut Ozil recalled in the No.10 role. Ozil was outstanding in the second half against Leicester on Monday so hopefully we see another virtuoso display from the German playmaker.

Alex Iwobi has been in fine form of late so I expect him to be recalled in attack with Henrikh Mkhitaryan set to make way after a fairly average performance in the Europa League last night.

Danny Welbeck grabbed the winner in Portugal and he could be retained on the wing but I think Emery might be tempted to go with Pierre-Emerick Aubameyang in attack as the Gabon hitman has netted four goals in his last three games.

Alexandre Lacazette will be recalled up front after being rested in Europe so if Emery sticks with his 4-2-3-1 formation then we could see Aubameyang moved out to the wing against Palace this weekend to accommodate the Frenchman through the middle. 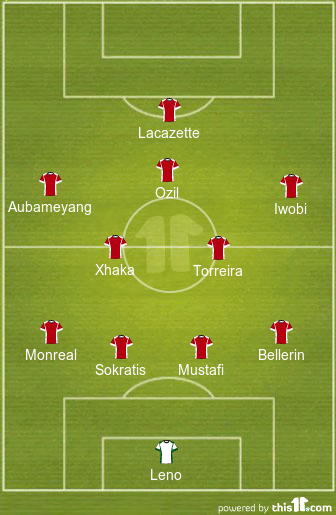