Chelsea take on Burnley at Turf Moor on Sunday afternoon. Here is the side I think Maurizio Sarri will select for the game:

Chelsea will be looking to keep the pressure on the top two with a win when they take on Burnley at Turf Moor on Sunday afternoon. Here is the side I think Maurizio Sarri will select for the game:

Goalkeeper: There is no deliberation needed over who will start in goal as summer signing Kepa Arrizabalaga is certain to keep his place between the sticks after an impressive first few months at the club so Willy Caballero will once again be on the bench.

Defence: Sarri will make wholesale changes to his defence with several key players recalled after being rested in midweek. Cesar Azpilicueta will be recalled at right-back with Davide Zappacosta making way while Marcos Alonso will replace Emerson Palmeiri at left-back.

David Luiz and Antonio Rudiger were both rested for the Europa League victory over BATE Borisov so they are expected to be recalled with Gary Cahill and Andreas Christensen dropping out.

Midfield: We should also see changes in midfield with Jorginho coming back in for Cesc Fabregas after the Italian international was given a well-earned breather on Thursday night. N’Golo Kante will also be recalled after he was rested against BATE.

Ruben Loftus-Cheek will be hoping he did enough to keep his place after scoring a hat-trick in Europe but I have a feeling the youngster will still make way on Sunday afternoon with Mateo Kovacic keeping his place alongside Jorginho and Kante. Sarri now has an array of options in midfield with Loftus-Cheek battling Fabregas and Ross Barkley for a place on the bench.

Attack: Chelsea will hand a late fitness test to Eden Hazard after he missed the win over BATE with a back injury that he sustained against Manchester United last weekend. The injury was only minor so I expect Hazard to be passed fit to return in attack at Turf Moor.

Pedro is the man likely to make way as Willian could keep his place in front three and it will be interesting to see who Sarri goes with up front. Alvaro Morata started against United in the league last weekend and had a poor game while Olivier Giroud came in against BATE.

With Hazard enjoying an excellent understanding with Giroud and Burnley being a physical side, I think the French international will get the nod on Sunday with Morata on the bench. 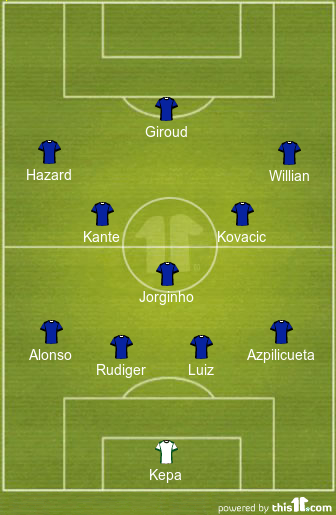