Arsenal have been drawn to play Tottenham in the quarter-finals of the Carabao Cup but favourites Manchester City and Chelsea have been kept apart.

Arsenal have been drawn to play Tottenham in the quarter-finals of the Carabao Cup but favourites Manchester City and Chelsea have been kept apart.

The Gunners booked their place in the last-8 with a narrow 2-1 win over Blackpool on Wednesday night with youngster Emile Smith Rowe scoring what turned out to be the winning goal at the Emirates.

Tottenham eased in to the next round of the competition with a 3-1 victory at West Ham thanks largely to a brace from Hueng-min Son and they’ve been rewarded with an exciting trip to north London rivals Arsenal in the quarter finals.

Chelsea were made to work by Derby County as they needed two own goals and a Cesc Fabregas winner to beat Frank Lampard’s side 3-2 in a thriller at Stamford Bridge on Wednesday night.

The Blues have now been drawn at home to face Bournemouth in the last-8 after they beat Norwich City 2-1 on Tuesday night while Middlesbrough will host Burton after they edged past Crystal Palace 1-0.

Manchester City are most bookmakers favourites to win the competition for the second year running and they’ll face either Leicester or Southampton if they can beat Fulham at the Etihad Stadium on Thursday night.

The quarter-final ties will take place in the week commencing December 17. 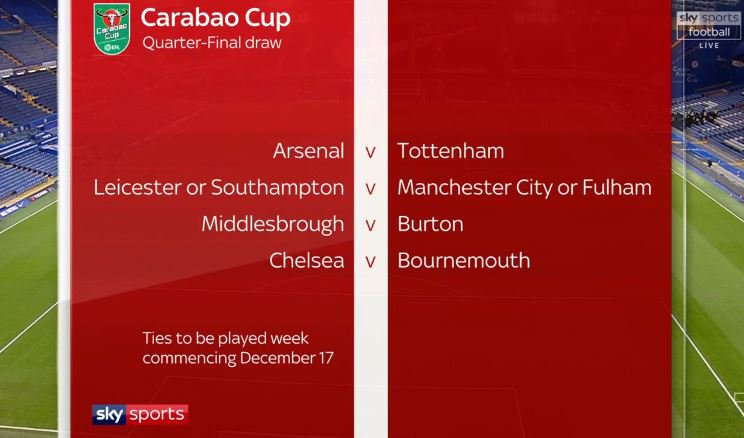