Here is our match preview ahead of Chelsea’s Premier League clash with Crystal Palace including team news, expected line-ups and predicted score

Chelsea will be looking to keep the pressure on the Premier League’s top two with a win over Crystal Palace at Stamford Bridge on Sunday afternoon.

The Blues warmed up for the game with a 3-2 victory over Frank Lampard’s Derby County in midweek to book their place in the quarter-finals of the Carabao Cup but it’s league matters that are the focus tomorrow.

Maurizio Sarri’s side currently sit third in the table – two points adrift of joint leaders Manchester City and Liverpool – following last weekend’s win at Burnley so Chelsea will be desperate to maintain the pressure with another victory in west London on Sunday.

They’ll face a Palace side that are 14th in the table having won just two of their 10 games so far but Roy Hodgons men will be in confident mood after taking a well-earned point with a 2-2 draw against Arsenal last weekend.

Chelsea should welcome Eden Hazard back in to the squad after he recovered from a back injury. The Belgian international returned to training on Thursday but Sarri says he’s not ready to play the full ninety minutes just yet so Hazard may have to make-do with a place on the bench.

Olivier Giroud is set to return after missing the Derby game with a muscle problem while the likes of Kepa, Cesar Azpilicueta, David Luiz, Marcos Alonso and Jorginho are expected to be recalled.

Ross Barkley is also set for a recall after being rested in midweek and the former Everton midfielder will be looking to maintain his impressive form of late.

Palace should welcome Wilfried Zaha back in to the side after he recovered from a minor shoulder problem that kept him out of the League Cup defeat to Middlesbrough.

However, Connor Wickham will miss the trip to Stamford Bridge with a thigh injury and joins Christian Benteke, Scott Dann and Joel Ward on the sidelines. 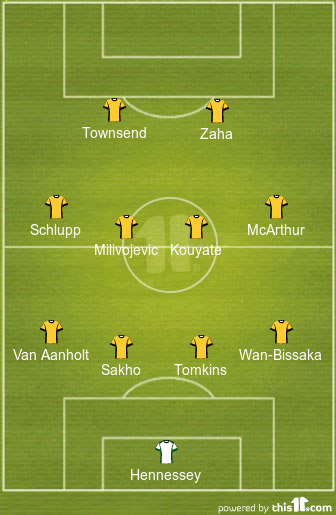 Chelsea 2-0 Crystal Palace: Chelsea have lost two of their last three league meetings with Palace but I don’t see that poor run continuing tomorrow. The Blues have been impressive this season and I don’t see them having too many problems seeing-off Palace on home soil. I’m going for a routine 2-0 win for Sarri’s men.