‘Useless’, ‘Get Out My Club’ – Some Liverpool Fans Destroy Player After Red Star Loss 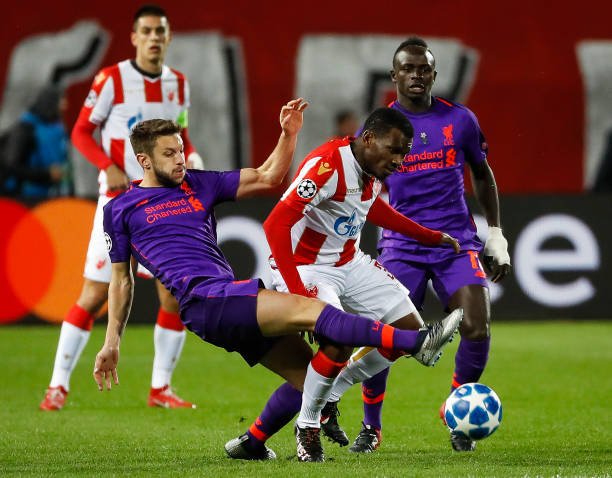 Some Liverpool fans have destroyed Adam Lallana for his poor display during their shock 2-0 defeat to Red Star Belgrade in the Champions League on Tuesday night.

Jurgen Klopp decided to make some changes from the side that drew at Arsenal last weekend with Lallana coming in for Fabinho in midfield while Daniel Sturridge was also preferred ahead of Roberto Firmino up front.

Sturridge had a night to forget and after missing a great chance at 0-0, the striker was replaced by Firmino at half-time with Red Star leading 2-0 thanks to a quick-fire double from Milan Pavkov midway through the opening forty-five minutes.

However, Lallana was also well below his best and some fans were surprised it took until the 79th minute for Klopp to haul the 30-year-old off as Liverpool crashed to a 2-0 defeat that leaves their hopes of progressing to the knockout stages of the Champions League hanging in the balance.

Understandably, Liverpool fans weren’t happy with the result or Klopp’s team selection last night and some have taken to social media to slam Lallana in particular for his poor display in Serbia.

One fan labelled the midfielder ‘useless’, another blasted him as ‘garbage’ while another said it was ‘painful’ watching Lallana playing last night. We even saw one fan compare the former Southampton star to a trash can while another suggested Klopp should see him and sign Nabil Fekir.

It may be a little harsh as Lallana was excellent for Liverpool during Klopp’s early years at the club but a succession of injuries have taken their toll and it remains to be seen whether the England international will be able to return to his best form.

Check out what some fans have been saying on social media:

Get Lallana out of my club and sign Fekir.

Lallana is so useless.

Lallana is not good enough. Fact.

I will pay from my own bank account to terminate Lallana's contract. I'm sorry, I love him but it's no time to be sympathetic. Axe him.

Honestly, I'm not just blaming him, but when was the last time you saw us play well with Adam Lallana in the side? Can you even remember?

I mean, I can't think of many times we've been great this season alone, but his inclusion 100% makes us worse.

Big fan of Adam Lallana playing in the 0 role.

When Lallana starts, we’re down to 10 men. It’s as simple as that.