Here is our match preview ahead of Chelsea’s Europa League clash with BATE Borisov in Belarus including team news, line-ups and prediction

Chelsea will look to secure top spot and progression to the knockout stages of the Europa League with a win over BATE Borisov in Belarus this evening [5.55pm kick-off].

The Blues maintained their Premier League title challenge with a 3-1 victory over Crystal Palace on Sunday afternoon that’s left them sitting second in the table and two points off leaders Manchester City, however, the focus will be on European matters today.

Chelsea are in Minsk seeking a fourth consecutive win in Group L that would secure safe passage to the knockout stages of the Europa League with two games to spare and they’ll also cement top spot if the game between Vidi and PAOK ends in a draw.

However, BATE should be in high spirits as they’ve won their last three domestic games and clinched another Belarusian league title at the weekend so there should be a party atmosphere at the Borisov Stadium this evening.

Eden Hazard has made the trip having made his return from injury with a cameo appearance off the bench last weekend. Sarri says the Belgian international isn’t ready to play the full ninety minutes so Hazard may have to make-do with a place on the bench.

Chelsea will be without Cesc Fabregas as he’s been struck down with a fever while the likes of Alvaro Morata and David Luiz were also left out of the travelling squad in order to rest ahead of Sunday’s Premier League clash with Everton.

Olivier Giroud is back in contention after recovering from a muscle issue and he’s expected to be recalled along with the likes of Davide Zappacosta, Gary Cahill, Emerson, Mateo Kovacic and Ruben Loftus-Cheek. 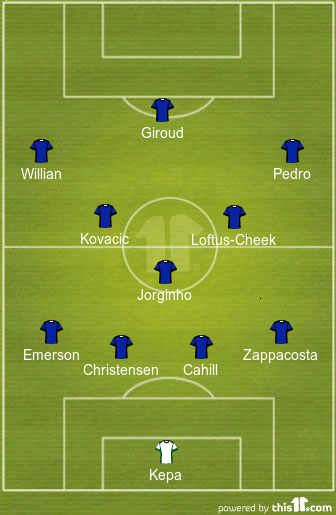 BATE 1-2 Chelsea: The Blues eased to a 3-1 win in the reverse fixture at Stamford Bridge two weeks ago and they’re the red hot favourites to collect all three points again today. BATE have lost four of their five games against English sides and have managed just two wins in their last 15 Europa League games so history is against them. I do think Chelsea will have to work hard for the win but I think they’ll just edge it.