Title chasing Liverpool welcome Fulham to Anfield on Sunday lunchtime. Here is the team we think Jurgen Klopp will select:

Liverpool will look to keep the pressure on at the top of the table with a win when they welcome Fulham to Anfield on Sunday lunchtime. Here is the team we think Jurgen Klopp will select:

Goalkeeper: Questions were asked of Alisson for the second Red Star goal on Tuesday night but the Brazilian has been excellent since joining from Roma in the summer so he’ll once again start between the sticks with Simon Mignolet on the bench.

Defence: Dejan Lovren should be in contention after missing the defeat in Belgrade due to illness but I think he’ll have to make do with a place on the bench on Sunday. Joel Matip failed to take his chance so I think he’ll make way but Joe Gomez has been declared fit despite nursing an Achilles issue so I think the youngster will line-up alongside Virgil van Dijk.

That means Trent Alexander-Arnold should continue at right-back as he’s expected to overcome a minor knock that forced him off in midweek while Andrew Robertson should once again start ahead of Alberto Moreno at left-back.

Midfield: Naby Keita was an unused sub against Red Star but Klopp says he’s fit to start on Sunday and I think he’ll be recalled as Liverpool could certainly do with his energy in the middle of the park after a couple of poor performances.

Jordan Henderson is also back in contention after overcoming a niggling hamstring injury that’s hampered him in recent weeks but Klopp may be cautious with the midfielder so he might be eased in to action from the bench.

Therefore, James Milner could keep his place in midfield with Fabinho coming in for Georginio Wijnaldum and Adam Lallana also making way after a disappointing return to the starting eleven on Tuesday night.

Attack: Xherdan Shaqiri will be back in contention after not making the trip to Belgrade in the Champions League but the Swiss international may have to make do with a place on the bench once again this weekend.

Daniel Sturridge failed to take his opportunity on Tuesday night as he missed a great chance to open the scoring at 0-0 and it proved to be a costly miss for the Merseysiders. Roberto Firmino is expected to be recalled on Sunday so Sturridge will find himself back on the bench.

Mohamed Salah and Sadio Mane weren’t at their best in midweek but I think Klopp will stick with his star attackers as they should have plenty of opportunities to shine against a poor Fulham defence this weekend. 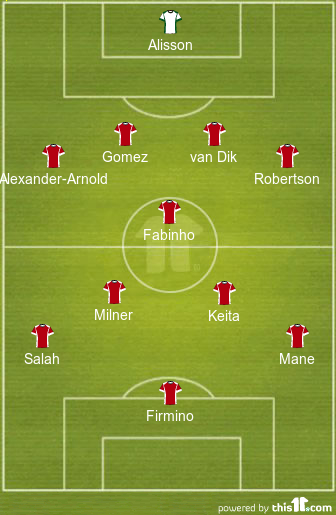