Here is our match preview ahead of Arsenal’s Premier League clash with Wolves at the Emirates including team news, line-ups and prediction

Arsenal will look to climb back in to the top four with a win when we take on Wolves at the Emirates Stadium on Sunday afternoon.

We qualified for the knockout stages of the Europa League with a 0-0 draw against Sporting Lisbon on Thursday night but the game was overshadowed by a serious injury to Danny Welbeck after the striker was stretchered off midway through the first half with a suspected broken ankle.

The players let the injury affect them in midweek but they have to put it to the back of their minds and focus on the task in hand tomorrow which is collecting a much-needed three points against Wolves before we head in to the international break.

Our unbeaten run stands at 15 games in all competitions and last weekend’s 1-1 draw with Liverpool has left us sitting fifth in the Premier League table so Unai Emery will be keen to close the gap on our rivals with a win tomorrow.

Wolves have tailed off in recent weeks after starting the season in superb form and last weekend’s 3-2 defeat to Tottenham has left the Midlands club sitting 11th in the table so boss Nuno Espirito Santo will be looking for a positive result in north London.

Obviously we’ll be without Welbeck for the foreseeable future after his shocking injury on Thursday night but Stephan Lichtsteiner is also missing after limping off with a hamstring injury against Sporting Lisbon.

Mohamed Elneny remains on the sidelines with a thigh problem while Nacho Monreal faces a late fitness test as he bids to return from a hamstring injury that’s kept him out of the last five matches.

Laurent Koscielny has continued to step-up his rehabilitation following six months out with an Achilles injury but he remains unavailable for selection along with Konstantinos Mavropanos – who’s nursing a groin injury.

Emery is expected to recall a number of regulars with the likes of Hector Bellerin, Lucas Torreira, Granit Xhaka, Mesut Ozil and Alexandre Lacazette coming back in after being rested in midweek.

As for Wolves, they have virtually a fully-fit squad to choose from with Jota the only injury doubt as he’s facing a late check on a minor knock. 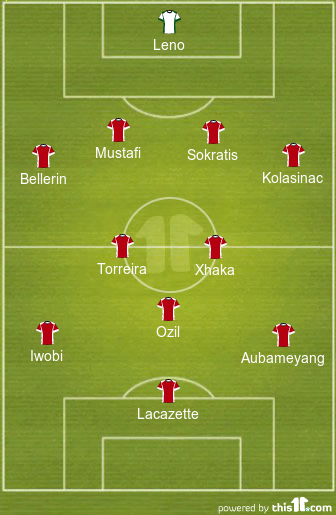 Arsenal 3-1 Wolves: We’re unbeaten in our last 19 games against Wolves in all competitions and we’re on a fantastic unbeaten run so I’m confident we’ll secure all three points tomorrow. The visitors showed plenty of grit to stage a comeback against Spurs last week and came close to snatching a point but I don’t see them taking anything away from the Emirates. I’m backing the boys to ease to a 3-1 win.