Manchester United take on Young Boys at Old Trafford on Tuesday night. Here is the line-up I think Jose Mourinho will go with:

Manchester United will look to put one foot in the knockout stages of the Champions League when they take on Young Boys at Old Trafford on Tuesday night. Here is the line-up I think Jose Mourinho will go with:

Goalkeeper: David De Gea will obviously keep his place between the sticks once again tomorrow night with Lee Grant expected to act as back-up from the bench.

Defence: United have confirmed that Victor Lindelof is facing a spell on the sidelines after suffering a muscle injury on Saturday so Mourinho will have to make a change at the back. Marcos Rojo is also missing due to a knock so I think Eric Bailly will get the nod ahead of Phil Jones to start alongside Chris Smalling in the middle of defence.

Luke Shaw missed the 0-0 draw with Crystal Palace at the weekend due to suspension but he’ll be available to face Young Boys and should return at left-back. That will free Ashley Young to move over to right-back and replace Matteo Darmian – who’s set to miss out with a minor injury.

Midfield: Mourinho has hinted he’s ready to freshen things up after a disappointing performance at the weekend so we could see Ander Herrera given a recall to add some ‘bite’ to the midfield. Juan Mata is likely to drop out if Herrera is recalled.

Nemanja Matic is a favourite under Mourinho so no doubt he’ll keep his place despite some questionable displays recently while Paul Pogba should once again start in the middle of the park.

Marouane Fellaini is pushing for a recall but Mourinho may use the Belgian international as an impact substitute while summer signing Fred may have to once again make-do with a place on the bench.

Attack: Anthony Martial has been performing well over the past few months but Mourinho is expected to change things up after the Palace game so the French international may find himself back on the bench tomorrow. Alexis Sanchez has been out-of-favour in recent games but the Chilean star could be recalled on the left side of attack against Young Boys.

Jesse Lingard is likely to be retained on the right while Romelu Lukaku is expected to lead the line up front once again meaning Marcus Rashford will be consigned to the bench. 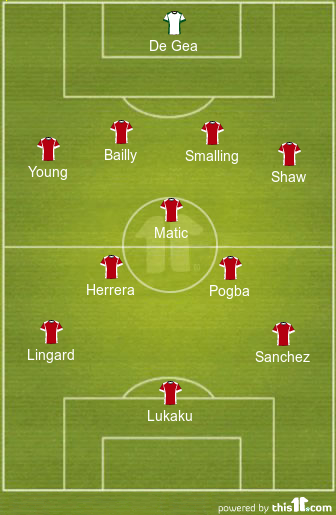