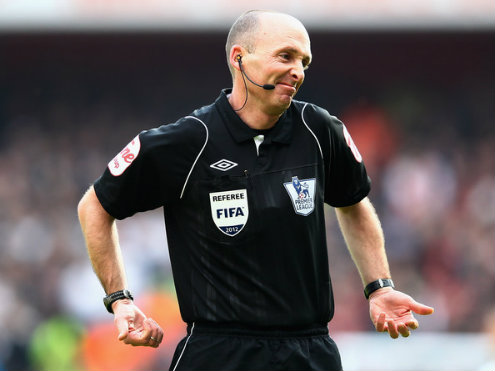 The Premier League have confirmed the match official appointments for the latest round of fixtures including Arsenal’s clash with Tottenham and Liverpool’s game with Everton this weekend.

The Gunners welcome their fierce rivals to the Emirates Stadium on Sunday afternoon with just three points separating the two clubs in the table so it’s going to be a vital game in determining who has the bragging rights this season. Therefore, no doubt some Arsenal fans will be seething by the fact that Mike Dean has been announced as the referee in charge of the North London Derby given his controversial history with the Gunners.

Liverpool will be looking to maintain their title charge when they welcome Everton to Anfield for Sunday’s 4.15pm kick-off and Chris Kavanagh has been confirmed as the referee in charge of the Merseyside derby.

It promises to be an enthralling day of derbies on Sunday as Chelsea also take on neighbours Fulham at Stamford Bridge and Craig Pawson will be the man in charge in west London this weekend.

On Saturday, Manchester City will be looking to cement their place at the top of the table with a win over Bournemouth and Stuart Attwell will oversee proceedings at the Etihad Stadium while Kevin Friend will take charge of Manchester United’s clash with Southampton on the south coast.

We have some big midweek fixtures to look forward too next week and no doubt the stand-out tie sees United entertain Arsenal on Wednesday night with Andre Marriner chosen as the referee in charge at Old Trafford.

Stuart Attwell will oversee Liverpool’s trip to Burnley, Jonathon Moss will be in charge of Chelsea’s trip to Wolves while Anthony Taylor will be the man in the middle when Tottenham welcome Southampton to Wembley.

Check out the match officials for some of the upcoming league games as confirmed by the Premier League: