Arsenal will be looking to secure top spot in Europa League Group E when they take on FC Vorskla in Kiev on Thursday. Here is our predicted line-up:

Assuming the game goes ahead, Arsenal will be looking to secure top spot in Europa League Group E when they take on FC Vorskla in Kiev on Thursday evening [5.55pm kick-off]. Here is the side Gooner Mac thinks Unai Emery will select for the game:

Goalkeeper: Bernd Leno will be rested ahead of Sunday’s North London Derby so Petr Cech should be recalled in goal with Emi Martinez coming in as back-up on the bench.

Defence: Emery will make plenty of changes to his defence and we should see us reverting to a back four having played three at the back against Bournemouth on Sunday afternoon. Sokratis and Shkodran Mustafi haven’t travelled but Rob Holding is set to keep his place at the back after being part of the travelling squad that flew out to Ukraine today.

Nacho Monreal is out for another two weeks and Sead Kolasinac is rested so Ainsley Maitland-Niles may be deployed at left-back while Carl Jenkinson should come in at right-back with Hector Bellerin given a breather ahead of the Tottenham game on Sunday.

Several youngsters have travelled but Emery may opt to play Stephan Lichtsteiner at centre-back as he’s back in contention after recovering from a hamstring injury.

Midfield: Granit Xhaka and Lucas Torreira are rested so Mohamed Elneny and Matteo Guendouzi are set for recalls in the middle of the park. Joe Willock has travelled with the squad but he may have to make-do with a place on the bench.

Attack: We should see plenty of changes in attack with our key men rested ahead of the Spurs clash but Danny Welbeck is obviously unavailable as he continues to recover from a broken ankle.

Mesut Ozil didn’t feature against Bournemouth but the German playmaker won’t be involved against Vorskla either while Alexandre Lacazette won’t be risked after returning to training today having missed out with a groin injury on Sunday.

Henrikh Mkhitaryan has travelled so the Armenian international should start out wide while Emile Smith Rowe should get another chance to impress in attack.

Aaron Ramsey is one of the few senior players who’ve made the trip so I expect he’ll start in the No.10 role while Eddie Nketiah should get a start up front. Fellow youngsters Charlie Gilmour, Tyreece John-Jules, Zech Medley, Bukayo Saka, Dominic Thompson and Jordi Osei-Tutu have travelled and should be on the bench. 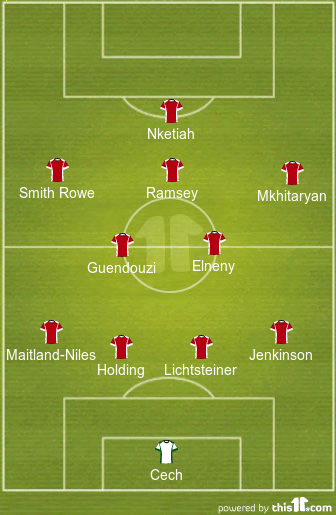