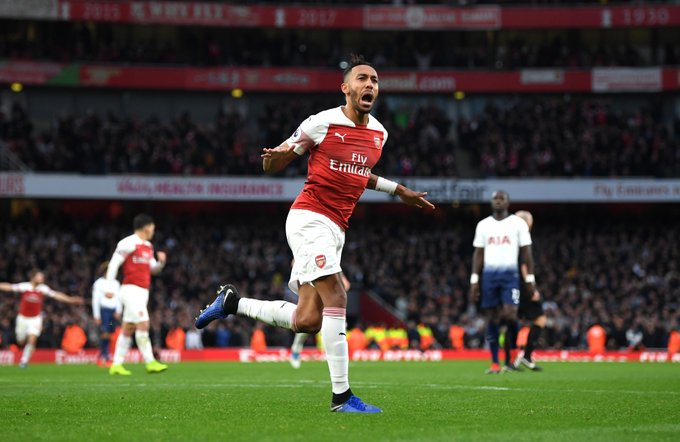 Pierre-Emerick Aubameyang scored a brace as Arsenal came from 2-1 down to beat Tottenham Hotspur in a thrilling North London Derby at the Emirates this afternoon.

Arsenal started on the front foot and were awarded a penalty in the 10th minute when Jan Vertonghen handled in the area following a free-kick. Aubameyang slotted home from the spot to make it 1-0.

The Gunners had chances to extend their lead but couldn’t take them and they were made to pay when Eric Dier glanced home a header from a Christian Eriksen free-kick in the 30th minute – although Bernd Leno should certainly have done better to keep it out.

Spurs then turned the game on it’s head as they were awarded a controversial penalty just minutes later when Heung-min Son went down under minimal contact from Rob Holding. Harry Kane made it 2-1 from the spot.

Unai Emery introduced Alexandre Lacazette and Aaron Ramsey at the break and the Welsh midfielder teed-up Aubameyang to fire home a superb strike from 18 yards to make it 2-2 in the 56th minute.

Ramsey was involved in Arsenal’s third goal as he fed Lacazette who saw his effort from 18 yards find the bottom corner of Hugo Lloris’ net to make it 3-2 thanks to a deflection off Dier.

Aubameyang then teed-up Lucas Torreira to make it 4-2 to Arsenal in the 77th minute and any hope of a late Tottenham comeback was dented when Jan Vertonghen was sent off late on.

The win means Arsenal leapfrog Tottenham in to fourth on goal difference and are now just one point behind third-placed Chelsea.