West Ham stars have been enjoying some time away from the football field after trying their hand at Crazy Snooker! 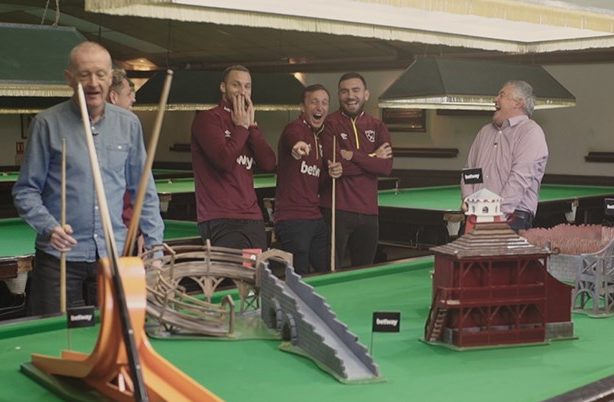 Having thrashed Newcastle 3-0 at the weekend, some West Ham stars have been enjoying some time away from the football field after trying their hand at Crazy Snooker!

In the hilarious video below, you can see Betway and West Ham combine for Crazy Snooker 3 as Marko Arnautovic and Mark Noble teamed-up with six-time world snooker champion Steve Davis to take on Javier Hernandez and Robert Snodgrass – who’d paired with snooker legend John Parrott.

The two teams went head to head at Romford Snooker club in a battle of crazy snooker that saw them take on six iconic holes – the Helter Skelter, the Water Wheel, the Loop-the-Loop, the Runaway Train, the See Saw and the Trap Door – on top of a snooker table.

As you can imagine, it resulted in a superb contest with the six men producing moments of brilliance with some breathtaking tricks shots as well as some hilarious misses along the way.

Highlights saw Noble challenging ex-world champion Parrott to ‘follow that, son!’ after he’d sunk his shot while Snodgrass accused Davis of trying to put him off as he lined-up a crucial effort. Despite it being a friendly match, at one point the attacker admitted he was feeling the pressure while Noble even questioned whether Parrott has drank 10 pints after missing one of his shots.

The match was to celebrate Betway’s sponsorship of the 2018 UK Snooker Championship. Let’s hope the likes of Ronnie O’Sullivan and Mark Selby haven’t been taking any tips from this lot.

Check out the video here: