Arsenal take on Manchester United at Old Trafford on Wednesday night. Here is the side Gooner Mac thinks Unai Emery will select for the game:

Arsenal will be looking to extend their unbeaten run to 20 games in all competitions when they take on Manchester United at Old Trafford on Wednesday night. Here is the side Gooner Mac thinks Unai Emery will select for the game:

Goalkeeper: Bernd Leno was at fault for Tottenham’s equaliser on Sunday afternoon as he should certainly have done more to stop Eric Dier’s header finding the back of the net but the German has otherwise been excellent since replacing Petr Cech and I think he’ll retain the gloves tomorrow.

Defence: Emery started with a back three during the wins over Bournemouth and Tottenham so it seems likely he’ll stick with that system at Old Trafford. Laurent Koscielny is still lacking match fitness so I don’t see him being in contention, therefore, I expect Rob Holding to line-up alongside Shkodran Mustafi and Sokratis – who was excellent against Spurs.

Sead Kolasinac was a real threat in the left wing-back position on Sunday and it’s a role that suits him more than the traditional left-back position. Nacho Monreal is still out with a hamstring injury so Kolasinac will continue on the left against United.

Hector Bellerin has also been showing some of his best form in recent weeks and I think the wing-back role gets the best out of him so the Spaniard will keep his place ahead of Stephan Lichtsteiner.

Midfield: Unfortunately Emery will be forced in to a change in midfield as Granit Xhaka will serve a one-game suspension after picking up his fifth booking of the season at the weekend. Matteo Guendouzi is favourite ahead of Mohamed Elneny to come in.

Lucas Torreira was outstanding against Tottenham and it was one of the best all-round midfield displays I’ve seen from an Arsenal player in a long time. The Uruguayan is now a vital part of our starting eleven so no doubt he’ll retain his place against United.

Attack: Emery has favoured Alex Iwobi and Henrikh Mkhitaryan in the wide positions in recent games but the pair were replaced at half-time against Spurs and it has to be said we looked far more threatening in the second half when we blew our rivals away with three goals.

Alexandre Lacazette came on to partner Pierre-Emerick Aubameyang up front and they were both excellent with Auba scoring twice – including a stunning goal – while Laca grabbed the all-important third goal to restore our lead. It will be difficult for Emery to leave either player out tomorrow night.

Aaron Ramsey has been out-of-favour under Emery this season but he made a huge impact off the bench on Sunday as he capped a fine performance with two assists. The Welshman played in the No.10 role and I think this is currently our best line-up so Emery may be tempted to go with it again on Wednesday.

That would mean there is no place for Mesut Ozil once again. The playmaker missed the Tottenham game with an apparent back injury and Emery says he remains a doubt tomorrow so I think a place on the bench is the best he can hope for. 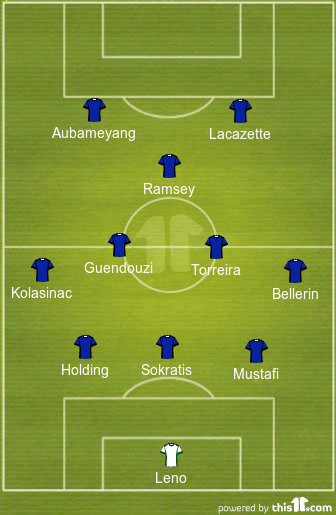