Chelsea take on Wolves at Molineux on Wednesday night. Here is the side I think Maurizio Sarri will select for the game:

Chelsea will look to keep pace with the top two with a win when they take on Wolves at Molineux on Wednesday night. Here is the side I think Maurizio Sarri will select for the game:

Goalkeeper: I don’t think there can be any debate over who will start between the sticks as Kepa has established himself as Sarri’s No.1 since arriving in the summer so Willy Caballero will therefore have to make-do with a place on the bench once again.

Defence: Marcos Alonso is a major doubt after being forced off with a back injury during the 2-0 win over Fulham on Sunday afternoon. Sarri is hopeful the defender will be fit but he may not take any chances with him so Emerson Palmeiri is in-line to come in at left-back.

Otherwise, I think it will be a familiar back four with Cesar Azpilicueta ready to celebrate signing his new contract with another run out at right-back while David Luiz and Antonio Rudiger should once again start in the middle of defence ahead of Gary Cahill and Andreas Christensen.

Midfield: We may see a change in midfield as Mateo Kovacic is a doubt having picked up a knock at the weekend. Ross Barkley is also struggling with an ankle injury so Ruben Loftus-Cheek could make a rare start in the middle of the park.

Jorginho is certain to once again start in the deep-lying playmaker position while N’Golo Kante should retain his place in midfield meaning Cesc Fabregas may have to make-do with a place among the substitutes.

Attack: Sarri could rotate his strikers tomorrow night so Olivier Giroud may make way having started the last two matches with Alvaro Morata expected to be recalled up front.

Eden Hazard wasn’t at his best against Fulham on Sunday afternoon but the Belgian international should still keep his place in attack at Wolves but it will be interesting to see who Sarri picks alongside him.

Pedro will hope he’s done enough to keep his place after opening the scoring against Fulham but Willian will be the fresher of the two as he was rested at the weekend so I think the Brazilian international may get the nod. 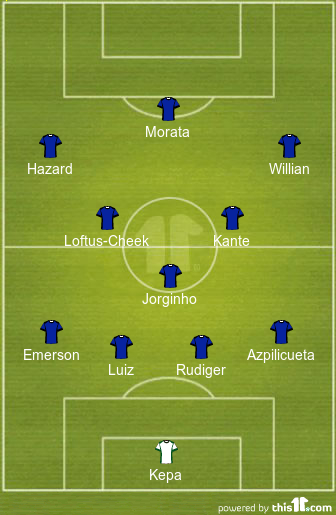