FA Cup third round matches involving Manchester United, Tottenham, Liverpool and Arsenal are among those to have been chosen for live TV broadcast.

FA Cup third round matches involving Manchester United, Tottenham, Liverpool and Arsenal are among those to have been chosen for live TV broadcast.

Tottenham were drawn to play the winner of Tranmere Rovers and Southport in the third round and that match will be played in front of the BT Sport camera’s on Friday January 2nd, kicking off at 7.45pm.

Manchester United were pitted against Championship side Reading in Monday night’s draw and Jose Mourinho’s men will be on BT Sport on Saturday January 5th, in the 12.30pm slot.

There could be a fairytale FA Cup tie if Solihull Moors beat Blackpool in their second round replay as the winner will host Arsenal in front of the BT Sport camera’s on Saturday evening at 5.30pm on January 5th.

The following day, Woking will entertain Watford at 2pm – once again on BT Sport – while the winner of Wrexham and Newport will take on Leicester at 4.30pm live on the BBC.

On Monday 7th January, Wolverhampton Wanderers will welcome high-flying Liverpool to Molineux and that match has been chosen for live broadcast by the BBC with the game kicking off at 7.45pm.

There are sure to be some exciting matches and while the likes of Tottenham, Liverpool, United and Arsenal will all be confident of progressing to the fourth round, let’s hope for a couple of giant killings! 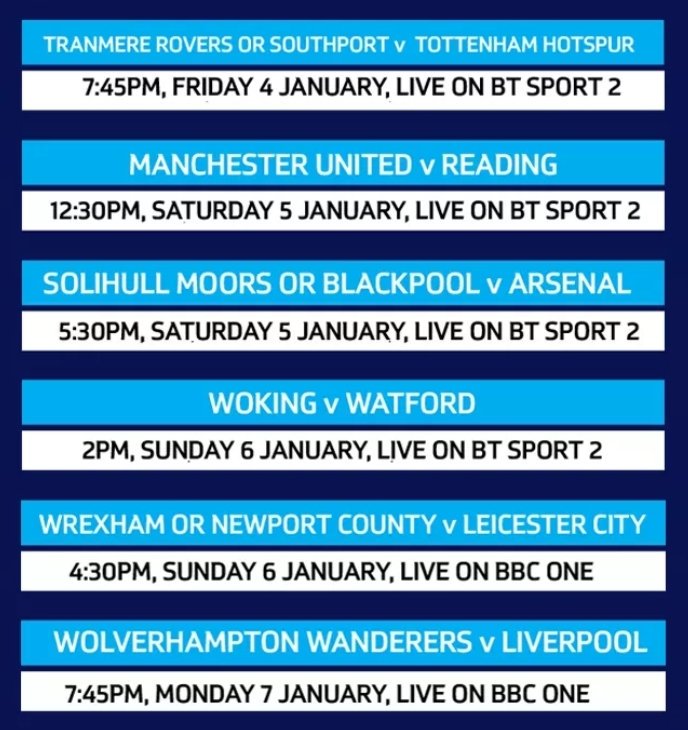