Arsenal take on Huddersfield at the Emirates on Saturday afternoon. Here is the side Gooner Mac thinks Unai Emery will select for the game:

Arsenal will be looking to maintain the pressure on the top four with a win when they take on Huddersfield at the Emirates on Saturday afternoon. Here is the side Gooner Mac thinks Unai Emery will select for the game:

Goalkeeper: Bernd Leno could have done better with the second Man Utd goal on Wednesday night as he was too hesitant to come out but he’s still Unai Emery’s number one so the German should keep his place ahead of Petr Cech this weekend.

Defence: Emery has gone with a back three in our last three Premier League matches so it seems the boss is keen to stick with the new system, however, he has a decision to make over who replaces Rob Holding.

Concerning reports suggest he may have damaged cruciate knee ligaments after being stretchered off against United so he’s certain to miss the Huddersfield game. Holding has been playing on the left of the back three so the ideal candidate to replace him could be Nacho Monreal.

The Spaniard returned to full training this week after recovering from a hamstring injury and he has experience in playing at centre-back so Emery may go with Monreal alongside Sokratis and Shkodran Mustafi this weekend.

Laurent Koscielny could be in the squad but Emery suggests a place on the bench is the best he can hope for as he’s been pencilled in to start against Qarabag in the Europa League next week.

Midfield: Sead Kolasinac has been enjoying his time in the left wing-back role and while he was defensively poor for the second United goal, he’s been a threat going forward so I expect him and Hector Bellerin to keep their places against Huddersfield.

Lucas Torreira was excellent again on Wednesday night so he should retain his place in midfield. Matteo Guendouzi did OK against an aggressive United side but I think we’ll see Granit Xhaka recalled after serving his one-match ban.

Attack: Aaron Ramsey is a major doubt after picking up an ankle injury against Man Utd while Mesut Ozil faces a late fitness test on a back problem that’s kept him out of the last three matches.

Alexandre Lacazette made an impact off the bench at Old Trafford after ‘scoring’ the second goal [it was his goal, not Rojo’s] so I hope to see him recalled up front and that could see Pierre-Emerick Aubameyang moved out to the wing.

It seems Emery is reluctant to play both forwards in the tougher matches but no disrespect to Huddersfield, we should be able to cope with Auba and Laca both starting on Saturday.

Alex Iwobi has been in favour in recent weeks but I thought Henrikh Mkhitaryan was superb off the bench against United and feel he may get a recall in attack this weekend. 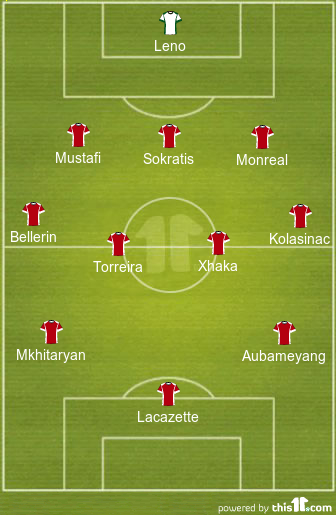