Manchester United take on Fulham at Old Trafford on Saturday afternoon. Here is the line-up I think Jose Mourinho will go with:

Manchester United will be looking to build on their encouraging performance against Arsenal when they take on Fulham at Old Trafford on Saturday afternoon. Here is the line-up I think Jose Mourinho will go with:

Goalkeeper: David De Gea made a rare mistake after failing to deal with Shkodran Mustafi’s header for the first Arsenal goal but the Spaniard is still certain to keep his place between the sticks this weekend.

Defence: Mourinho has played a back three recently but I think he may revert to a flat back four at home to Fulham. Eric Bailly put in a commanding performance against the Gunners so it would be harsh to drop the Ivory Coast international on Saturday.

Chris Smalling recovered from a minor knock to start on Wednesday night and came through the game unscathed so I think he’ll be the man to keep his place with Marcos Rojo dropping out. The Argentine was perhaps fortunate not to be sent off against Arsenal and looked rusty so he’ll make way against the Cottagers.

Diogo Dalot was excellent on his Premier League debut so there is no reason to think he shouldn’t keep his place at right-back with Antonio Valencia still nursing an injury. Luke Shaw missed the draw with Arsenal due to a knock that he sustained last weekend but the England international is expected to be fit to return at left-back on Saturday.

Midfield: Paul Pogba was dropped against the Gunners last night so it will be interesting to see if he’s recalled this weekend. If Mourinho reverts to a back four then I think the Frenchman will come in to the three-man midfield.

Nemanja Matic should keep his place in the holding role while I think we may see Marouane Fellaini recalled. Ander Herrera wasn’t at his best against Arsenal so Mourinho may turn to Fellaini as Fred is clearly out-of-favour after not even being named in the squad last night.

Attack: Romelu Lukaku was dropped against the Gunners and Marcus Rashford put in a tireless performance up front so I think the youngster has done enough to keep his place in the attack this weekend.

Anthony Martial limped off on Wednesday night after getting himself on the score-sheet but Mourinho says it was a minor issue so the Frenchman should be fit to keep his place on the left with Alexis Sanchez still on the sidelines.

Jesse Lingard scored the crucial equalising goal against Arsenal so the England ace is expected to retain his place in attack meaning Juan Mata may have to make do with a place on the bench against Fulham. 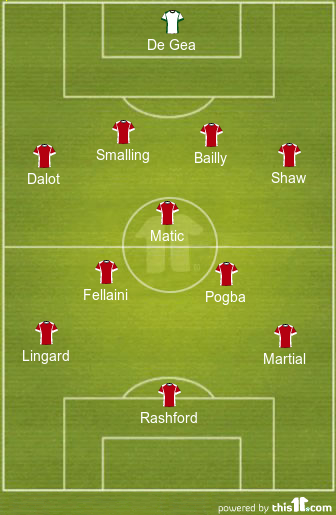