Manchester City will look to maintain their place at the top of the table with a win over Chelsea at Stamford Bridge on Saturday evening. Here is the latest Man City team news and expected line-up:

Pep Guardiola’s side maintained their two-point advantage at the top of the table with a 2-1 win at Watford on Tuesday night. However, they could find themselves down in second if Liverpool beat Bournemouth in Saturday’s early kick-off so City may be under pressure to respond in west London.

Ederson is certain to keep his place between the sticks while we should see Kyle Walker and John Stones continuing in the back four after putting in some impressive displays in recent weeks.

Fabian Delph is expected to keep his place at left-back in the absence of the injured Benjamin Mendy but we could see Aymeric Laporte recalled to the starting eleven after Vincent Kompany was forced off with cramp in midweek.

Fernandinho will obviously continue in the holding role while David Silva and Bernardo should keep their places in the middle of the park with Kevin De Bruyne once again ruled out. The Belgian international is close to making his return from a knee ligament injury but this weekend will come too soon.

Unfortunately for City, they’ll also have to make do without Sergio Aguero as the striker has been ruled out with a groin injury that kept him out of the Watford game so Gabriel Jesus will continue up front.

Riyad Mahrez continued his excellent form this season with another goal in midweek so he should keep his place but Raheem Sterling may get a recall with Leroy Sane making way despite getting himself on the score-sheet at Vicarage Road.

Here is how City are expected to start: 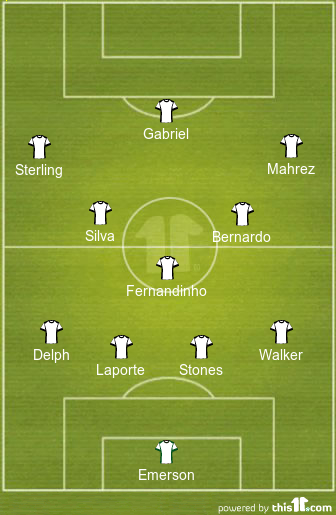