Liverpool welcome Napoli to Anfield on Tuesday night. Here is the team we think Jurgen Klopp will select for this crucial game.

Liverpool welcome Napoli to Anfield on Tuesday night knowing they have to win in order to seal qualification to the knockout stages of the Champions League. Here is the team we think Jurgen Klopp will select:

Goalkeeper: Alisson kept another clean sheet during the impressive 4-0 victory over Bournemouth at the weekend. Another shut-out tomorrow and Liverpool will stand a great chance of progressing in Europe. It’s going to be a big night for the Brazilian international.

Defence: Dejan Lovren will be assessed ahead of the game after missing the last three matches with concussion but he’s trained for the past two days and should be ready to return to the squad. Joel Matip has featured in the last two matches having been inactive for most of the season so Klopp will be tempted to give him a rest. Therefore, I think we’ll see Lovren come-in alongside Virgil van Dijk.

Andrew Robertson made a successful return to the starting eleven at the weekend after being rested against Burnley so he should keep his place at left-back while Trent Alexander-Arnold is expected to return at right-back with James Milner dropping out despite a solid display at Bournemouth. Obviously Joe Gomez is out after fracturing his leg last week.

Midfield: Klopp has suggested he will rotate his side after an intense three league games inside the past seven days so we could see Jordan Henderson recalled in the middle of the park after being benched at the Vitality Stadium.

Naby Keita has been excellent recently but Klopp may feel he needs a breather having started against both Burnley and Bournemouth so Henderson may replace him in midfield with Fabinho keeping his place.

Some will feel Liverpool should play 4-2-3-1 as they have to win this game. That could see Xherdan Shaqiri keep his place in attack and he probably deserves too as he’s been excellent recently.

However, I think Klopp may be a little more reserved to start with in this game so we could see Georginio Wijnaldum keep his place to start alongside Henderson and Fabinho in a three-man midfield.

Attack: Sadio Mane made his return off the bench at the weekend after missing the Burnley game with a foot injury and Klopp has confirmed he’s now available to start against Napoli. The Senegalese international has been a key player for Liverpool this season so I think he’ll be recalled for this crucial game.

Mohamed Salah was back to his best with a superb hat-trick at Bournemouth so no doubt he’ll retain his place in attack while Roberto Firmino is favourite to make-up the front three despite his inconsistent form of late.

That means the likes of Shaqiri, Daniel Sturridge and Divock Origi will have to make do with places on the bench while Adam Lallana is also set for a role in the squad despite picking up a nasty head wound on Saturday. 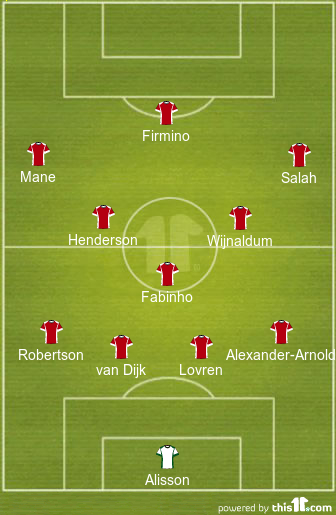