‘Best On The Planet’, ‘Love Him’ – Some Fans Drool Over Liverpool Star For CL Heroics 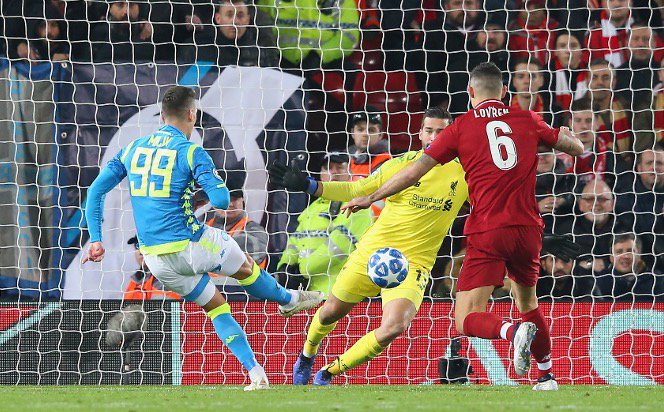 Some Liverpool fans have been hailing Alisson Becker following his last gasp save that sealed their progression to the knockout stages of the Champions League with a 1-0 win over Napoli on Tuesday night.

Liverpool went in to the final group game sitting third in the table and knowing they needed to beat top-of-the-table Napoli 1-0 or by two clear goals in order to qualify for the last 16 of the competition.

The Reds got off to the perfect start as Mohamed Salah showcased his brilliance on the big stage once again as he scored a superb goal midway through the first half with the Egyptian international beating David Ospina at his near post to make it 1-0 in the 34th minute.

Liverpool dominated for long periods and created enough chances to put the game beyond doubt with Sadio Mane particularly at fault for not extending their advantage as he missed a number of clear cut chances.

Jurgen Klopp’s men could have rued those missed chances as Napoli had a golden opportunity to score a vital equaliser in the dying minutes of stoppage time. Substitute Arkadiusz Milik gathered the ball just 8 yards out and all he had to do was finish past Alisson to snatch a draw that would have put Napoli through and sent Liverpool crashing out.

However, Alisson pulled off a stunning save to deny the Napoli hitman and secure a priceless 1-0 victory for Liverpool that sees them progress to the knockout stages of the Champions League as Group C runners-up behind PSG.

Fans have taken to social media to hail Alisson with many claiming the Brazilian international is now the best goalkeeper in the world while others declared their ‘love’ for the Reds stopper.

Check out what fans have been saying following Alisson’s heroics:

?BEST ON THE PLANET ? pic.twitter.com/vQHK8JWJYx

As a straight married man, it feels weird to say I you love to a married, straight man. @Alissonbecker ❤️ I love you pic.twitter.com/O9FZgDZwxl

Alisson what a man! God I love him so much. Got to be the best keeper in the world at the moment.

Apparently my reaction to that Alisson save was OTT. Which resulted in me shouting up the stairs "I love him more than you and the kids" #lfc

Alisson is the best signing we have ever made. This is what it’s like to have a world class keeper.

Alisson worth the money for that save alone. What a beautiful specimen.

Alisson and Van Dijk are proof that it doesn’t matter what you pay, it’s what you get for it. Both priceless.

Van Dijk and Alisson, forever wobbles my brain that Liverpool had the actual common sense for once to go out and buy two absolute world-class diamonds rather than some unknown 34 year olds from Fortuna Dusseldorf.

What a difference a world class keeper makes."Ali-ss-on' the chant from The Kop as players depart.

In Mo Salah and Alisson #LFC have absolute world class talent at both ends of the pitch – and not only was that the difference v Napoli, it also puts them in with a genuine shot at honours this season.