Arsenal welcome Qarabag to the Emirates Stadium on Thursday night. Here is the side Gooner Mac thinks Unai Emery will select for the game:

Arsenal will look to wrap-up the Europa League group stages in style when they welcome Qarabag to the Emirates Stadium on Thursday night. Here is the side Gooner Mac thinks Unai Emery will select for the game:

Goalkeeper: Emery will continue to rotate his goalkeepers in the Europa League so Petr Cech is set to be recalled between the sticks with Bernd Leno given a rest.

Defence: The boss has deployed a back three in recent weeks but given our problem’s at centre-back, I think he’ll revert to a flat back four tomorrow night and Emery has already confirmed Laurent Koscielny will make his first start in over seven months after recovering from an Achilles injury.

Sokratis is suspended for the trip to Southampton on Sunday so it seems likely he’ll join Koscielny in the middle of defence with youngster Zech Medley an option from the bench. Shkodran Mustafi has a hamstring injury, Rob Holding is obviously out with a knee ligament injury while Dinos Mavropanos is still nursing a groin problem.

Nacho Monreal made his comeback at the weekend and Stephan Lichtsteiner is available but they’re expected to start in a three-man defence against Southampton so it’s unlikely they’ll be risked against Qarabag. Therefore, Ainsley Maitland-Niles and Carl Jenkinson could be deployed in the full-back positions with Sead Kolasinac and Hector Bellerin rested.

Midfield: Lucas Torreira and Granit Xhaka are certain to be given a breather to keep them fresh for the Premier League game on Sunday so Mohamed Elneny is expected to be recalled. Matteo Guendouzi isn’t likely to start at Southampton so he could get another run out tomorrow.

Attack: Aaron Ramsey is back in full training after recovering from an ankle injury but I don’t think he’ll be risked from the start while the likes of Alexandre Lacazette and Pierre-Emerick Aubameyang should be rested for Southampton.

Mesut Ozil will be in the squad after recovering from a back injury but I’m not sure Emery will start him so we may see him introduced from the bench with Joe Willock given another chance to impress after getting on the score-sheet against Sporting Lisbon last time out in the Europa League.

Emile Smith Rowe should also get another start as he’s featured heavily in Europe and he’ll be hoping to continue his fine goal-scoring form having scored two in his last three Europa League games.

Eddie Nketiah is expected to start up front in the absence of the injured Danny Welbeck and the 19-year-old will be desperate to show-case his goal-scoring abilities on the first team stage.

It will be interesting to see who Emery also picks in attack but I think it will be between Alex Iwobi and Henrikh Mkhitaryan as they could both do with a morale-boosting performance. Iwobi may just get the nod. 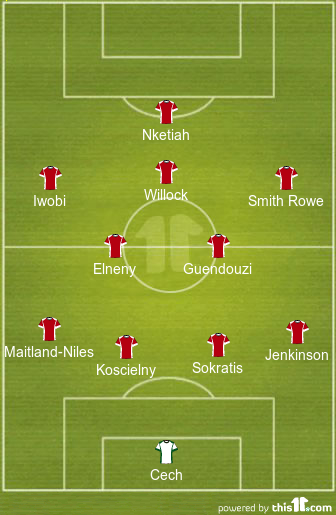