Tottenham welcome Burnley to Wembley on Saturday afternoon. Here is the side we think Mauricio Pochettino will select for the game:

Tottenham will be on a high following their Champions League heroics when they welcome Burnley to Wembley on Saturday afternoon.  Here is the side we think Mauricio Pochettino will select for the game:

Goalkeeper: Hugo Lloris is expected to once again start between the sticks tomorrow afternoon with Paulo Gazzaniga set to keep his place on the bench ahead of Michel Vorm.

Defence: Tottenham will assess the fitness of Kieran Trippier ahead of the game after he stepped-up his recovery from a groin injury while Serge Aurier remains a doubt with his own groin complaint that kept him out of the trip to Barcelona. Kyle Walker-Peters was thrown in at the deep-end in midweek and struggled at times but Pochettino is expected to give the youngster another chance against Burnley this weekend.

Danny Rose was excellent at the Nou Camp but he may be given a breather with Ben Davies recalled at left-back while Juan Foyth may come back in to the middle of defence as he’s set to return from a hamstring injury. Toby Alderweireld may be handed a rest so Jan Vertonghen could keep his place at the back.

Midfield: Eric Dier is almost certainly going to be recalled in midfield after being benched during Tottenham’s draw at Barcelona. Moussa Sissoko has been in great form lately so Harry Winks might be the man to make way.

Mousa Dembele is close to making his return from an ankle injury but this game will come too soon so he’ll once again join Victor Wanyama on the sidelines with the Kenyan international still recovering from a knee injury.

Attack: Lucas Moura came off the bench to score Tottenham’s crucial goal at the Nou Camp so he should be rewarded with a start in attack against Burnley on Saturday afternoon.

Erik Lamela is also pushing for a recall after returning to full fitness so we could see Hueng-min Son and Christian Eriksen rested with Dele Alli keeping his place in the side.

Pochettino may be tempted to give Harry Kane a well-earned rest against lowly Burnley but with the League Cup up next on Wednesday night, the striker is expected to start tomorrow before being given the night off next week. 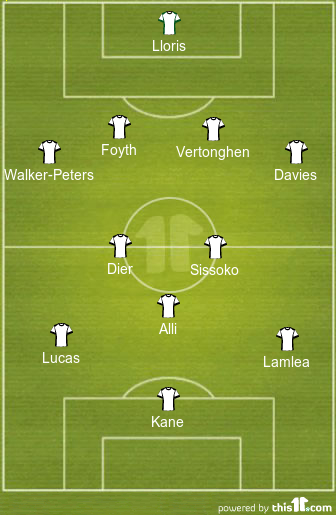