Chelsea take on Bournemouth at Stamford Bridge on Wednesday night. Here is the latest team news and expected line-up for the game.

Chelsea will be looking to book their place in the semi-finals of the Carabao Cup when they take on Bournemouth at Stamford Bridge on Wednesday night. Here is the latest team news and expected line-up for the game.

Maurizio Sarri is expected to once again rotate his squad with his key men rested ahead of Chelsea’s Premier League clash with Leicester City on Saturday afternoon. However, goalkeeper Kepa could be retained between the sticks meaning Willy Caballero will have to make-do with a place on the bench.

In defence, we should see wholesale changes with Cesar Azpilicueta, David Luiz, Antonio Rudiger and Marcos Alonso all rested. Davide Zappacosta and Emerson Palmeiri are in-line for recalls in the full-back positions while Gary Cahill is fit to return along with Andreas Christensen after recovering from a knock.

Jorginho is almost certain to be rested so Cesc Fabregas should come in to the deep-lying playmaker position while Ross Barkley is likely to be recalled in place of Mateo Kovacic. N’Golo Kante may keep his place in the middle of the park.

Eden Hazard picked up a knock during the win over Brighton at the weekend so the Belgian international won’t be risked against Bournemouth in the League Cup tomorrow night while Victor Moses remains on the sidelines.

Alvaro Morata is also set to miss out due to a knee injury that he sustained during the Europa League game against Vidi last week so Olivier Giroud is expected to be recalled to lead the line up front.

Sarri could be tempted to hand youngster Callum Hudson-Odoi another chance to impress but I think he’ll go with Ruben Loftus-Cheek and Willian instead meaning Odoi will join Pedro on the bench.

This is how I think Chelsea will line-up against Bournemouth: 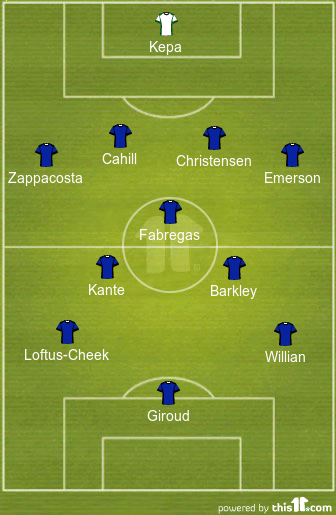