Tottenham take on Arsenal at the Emirates on Wednesday night. Here is the side we think Mauricio Pochettino will select for the game:

Tottenham will be looking to book their place in the semi-finals of the Carabao Cup when they take on Arsenal at the Emirates on Wednesday night. Here is the side we think Mauricio Pochettino will select for the game:

Goalkeeper: Pochettino confirmed at his pre-match press conference this afternoon that Paulo Gazzaniga will be handed a start in goal with number one Hugo Lloris rested.

Defence: Jan Vertonghen has been ruled out until the New Year with a thigh injury that he sustained during the 1-1 draw with Barcelona last week but Juan Foyth and Davinson Sanchez could be back in contention after recovering from hamstring injuries. Pochettino is unlikely to risk both so I’d expect one of Foyth or Sanchez to partner Toby Alderweireld at the Emirates.

Ben Davies played at centre-back against Burnley but I think we might see him moving to left-back against Arsenal with Danny Rose dropping out. Serge Aurier is set to continue on the sidelines due to a groin injury. Kieran Trippier made his return during the 1-0 win over Burnley at the weekend but he may be given a breather with Kyle Walker-Peters coming in at right-back.

Midfield: Pochettino has confirmed he’ll rotate his side so we should see Moussa Sissoko given a well-earned rest while Eric Dier has been ruled out until the New Year after having his appendix removed.

Youngster Oliver Skipp impressed against Burnley at the weekend so he could be given another chance in the middle of the park. Harry Winks should be recalled with Moussa Dembele and Victor Wanyama still out through injury.

Attack: Christian Eriksen was named on the bench at the weekend and came on to score the late winner so the Danish international could be recalled against Arsenal tomorrow night with Dele Alli given a breather.

Hueng-min Son was also rested against Burnley so he should come back in to the attack with Erik Lamela likely to make way after making his return to the starting eleven on Saturday.

It will be interesting to see if Harry Kane starts or if Pochettino gives his star man a rest. Kane has a superb goal-scoring record against Arsenal and Spurs will want to beat their rivals to reach the last four so I think the England international will lead the line up front.

That means Fernando Llorente will once again have to make do with a place on the bench while Lucas Moura could keep his place in attack. 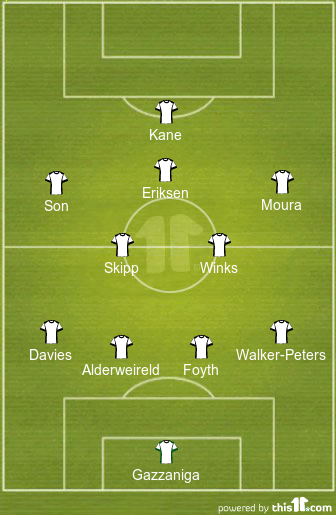