Arsenal take on Brighton at the Amex Stadium at lunchtime on Boxing Day. Here is the side Gooner Mac thinks Unai Emery will select for the game:

Arsenal will be looking to climb above Chelsea in to the top four with a win when they take on Brighton at the Amex Stadium at lunchtime on Boxing Day. Here is the side Gooner Mac thinks Unai Emery will select for the game:

Goalkeeper: Bernd Leno returned to the starting eleven during the 3-1 win over Burnley and I don’t see Emery dropping him any time soon so Petr Cech will have to make-do with a place on the bench.

Defence: Arsenal’s defensive issues could be eased as Laurent Koscielny is expected to return after not featuring against Burnley having been rested as he’s only recently returned from eight months on the sidelines. Shkodran Mustafi could also be back in contention after sitting out the last three matches with a hamstring injury.

If the duo are both passed fit, then I expect they will come in alongside Sokratis – who was excellent on Saturday – in a back three with Nacho Monreal ruled out after limping off with a muscle issue against the Clarets.

Midfield: Sead Kolasinac made his return on Saturday after recovering from a muscle problem and he was excellent down the left so I expect he’ll retain his place in the wing-back role. Stephan Lichtsteiner could be recalled on the opposite flank with Ainsley Maitland-Niles making way.

Lucas Torreira was a substitute against Burnley so the Uruguayan international is expected to be recalled on Wednesday evening with Mohamed Elneny dropping out. Granit Xhaka should resume his midfield role following a stint in defence and it will be good to see him rekindle his partnership with Torreira.  Matteo Guendouzi could be given a well-earned rest.

Attack: Mesut Ozil made the perfect comeback yesterday as he produced a couple of moments of magic to help carve Burnley open. We certainly missed his creativity while he was out so hopefully Emery gives him a chance to cement his position as there is no doubt we’re a much better team when he’s in the side.

Pierre-Emerick Aubameyang scored another two goals against Burnley but he’s played a lot of football lately and Emery could be tempted to give him a breather at Brighton on Boxing Day ahead of our trip to Liverpool next weekend.

That would see Alexandre Lacazette leading the line up front with Alex Iwobi the most likely to be recalled after he came off the bench to score the third goal against Burnley on Saturday afternoon.

Aaron Ramsey is also pushing for a recall but he may have to make-do with a place on the bench. Henrikh Mkhitaryan could miss out again with an ankle injury that kept him out of the Burnley game. 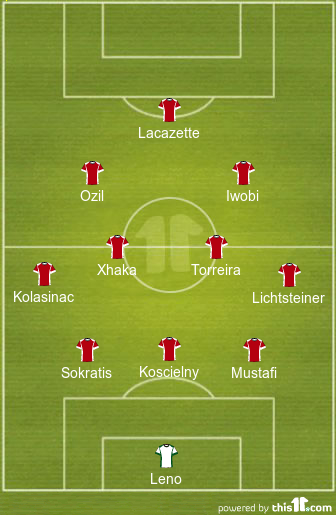