Arsenal take on Liverpool at Anfield on Saturday evening. Here is the side Gooner Mac thinks Unai Emery will select for the game:

Arsenal need a positive result to stay in touch with the top four when they take on Liverpool at Anfield on Saturday evening. Here is the side Gooner Mac thinks Unai Emery will select for the game:

Goalkeeper: Questions were asked of Bernd Leno once again after he rushed off his line for the Brighton equaliser on Wednesday evening. The German keeper has made a few mistakes in recent weeks but I still think Emery will stand by him and give Leno a chance to rediscover his form so Petr Cech will have to make-do with a place on the bench.

Defence: Arsenal’s defence has been decimated by injuries in recent weeks but Nacho Monreal should hopefully return against Liverpool after missing the draw at Brighton with a tight hamstring. Shkodran Mustafi is also expected to return to full training ahead of Saturday’s game so he could be back in contention after missing the last five matches with a hamstring complaint.

The duo’s return would be a big boost to Arsenal and allow Emery to select a more balanced back three with Sokratis keeping his place. Laurent Koscielny is still working his way back to full match fitness following eight months out so he could be given a breather after starting against Brighton.

Midfield: Sead Kolasinac should keep his place on the left side but I think we might see Ainsley Maitland-Niles given a recall on the right. Hector Bellerin is still out with a calf injury and Stephan Lichtsteiner was woeful against Brighton so the Arsenal boss may decide to bring in Maitland-Niles against Liverpool.

The Premier League have confirmed Lucas Torreira was NOT booked against Brighton after some outlets wrongly reported he had received his fifth yellow card of the season which would have ruled him out of the trip to Liverpool. But the Uruguayan international is free to play and I think he’ll keep his place alongside Granit Xhaka in the middle of the park. A switch in formation could see Matteo Guendouzi given a well-earned rest as I think he’s looked jaded in recent games.

Attack: Mesut Ozil was hooked at half-time against Brighton and it’s highly unlikely we’ll see him start away to Liverpool as Emery clearly has concerns over his work rate and we can’t carry him against the league leaders.

Alexandre Lacazette may also drop out if Emery decides to only play one striker up front and I think Pierre-Emerick Aubameyang is favourite to keep his place after cementing his position as the Premier League’s top scorer with another fine strike against Brighton.

Emery has often gone with two hard working attackers in the tough away games this season so Aaron Ramsey may be in-line for a recall after being named as a substitute in the last two matches.

Alex Iwobi could also come in to the attack to add some fresh legs but Henrikh Mkhitaryan and Danny Welbeck remain on the sidelines with long-term injuries so Eddie Nketiah should keep his place on the bench.

Here is how I think we’ll see Arsenal line-up against Liverpool: 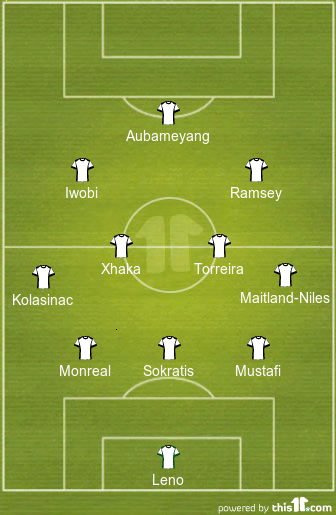