Chelsea entertain Southampton at Stamford Bridge on Wednesday night. Here is the side I think Maurizio Sarri will select for the game:

Chelsea will be looking to tighten their grip on fourth place with a win when they entertain Southampton on Wednesday night. Here is the side I think Maurizio Sarri will select for the game:

Goalkeeper: Kepa has continued to impress between the sticks since arriving last summer and got another clean sheet during the win at Crystal Palace over the weekend so he’s certain to retain the gloves ahead of Willy Caballero.

Defence: Chelsea are unlikely to change what’s been Sarri’s preferred back four for much of the season so I expect Cesar Azpilicueta to continue at right-back ahead of Davide Zappacosta while Marcos Alonso will once again start ahead of Emerson Palmeiri at left-back.

Andreas Christensen could be named on the bench but I doubt he’ll be considered from the start as Sarri will go with his strongest line-up tomorrow and rest his key players for the FA Cup clash at the weekend. Therefore, David Luiz should continue alongside Antonio Rudiger in the middle of the back four.

Midfield: Cesc Fabregas missed the win at Palace with a neck injury while Ruben Loftus-Cheek is also a doubt with a back problem. However, even if the duo are fit I still think a place on the bench is the best they can hope for against Southampton as Sarri will save them for the FA Cup game.

Jorginho and N’Golo Kante are expected to retain their places in midfield but I think we might see Mateo Kovacic recalled with Ross Barkley making way after Sarri criticised the England international after the Palace game.

Attack: Pedro has once again been ruled with a hamstring injury that he picked up against Watford while Callum Hudson-Odoi will be given a late fitness test on his own hamstring complaint after missing the trip to Palace.

Olivier Giroud is expected to be on the sidelines for a while after suffering an ankle injury at Palace so Alvaro Morats is set for a recall up front with Eden Hazard continuing on the wing following a stint in the ‘false 9’ role.

With Pedro and Hudson-Odoi out, Willian should keep his place in attack but Sarri has very few back-up options in the final third to call upon from the bench. 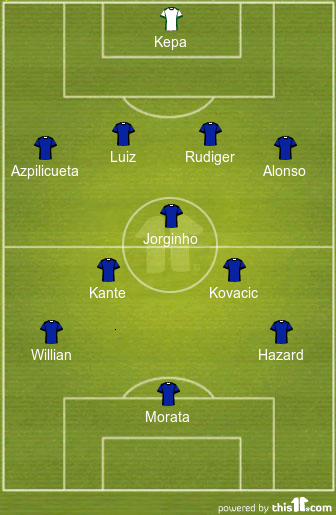