Gary Neville has heaped praise on Marcus Rashford after his Man of the Match display during Manchester United’s win at Newcastle United last night. 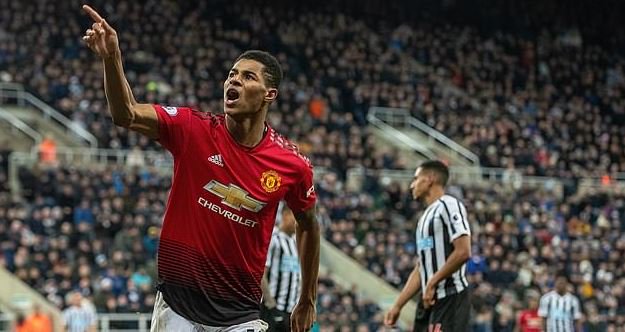 Gary Neville has heaped praise on Marcus Rashford and backed him to become a ‘top class’ player after his Man of the Match display during Manchester United’s win at Newcastle United last night.

Rashford scored 4 goals in his 20 appearances in all competitions for United under former boss Jose Mourinho this season with the Portuguese coach mainly using the 21-year-old from the wing during his time at the club.

However, Rashford has excelled since Ole Gunnar Solskjaer replaced Mourinho in the Old Trafford hot-seat with the young forward scoring 3 goals in his 4 games under the Norwegian.

Rashford has been deployed in a central striking role by Solskjaer and scored with an instinctive finish to secure Man Utd a 2-0 win over Newcastle at St James’ Park on Wednesday night.

It capped another superb display by the England international which earned him the Man of the Match award and Sky Sports pundit Gary Neville was quick to heap praise on Rashford after the game.

The former United right-back labelled Rashford as ‘outstanding’ and has backed the youngster to develop in to a ‘top class player’ for the Manchester giants over the coming years.

“They looked really dangerous going forward. I think with a bit more quality, Newcastle would have scored goals because there are still a few problems at the back.

“But the spring in the counter-attack is there and Rashford playing up front is fantastic – I love him to bits. He’s played nearly 150 games at the age of 21 and his potential is enormous. It’s actually now stepping up beyond potential to where he will be a top class player.

“People will talk about Romelu Lukaku and how is he getting back in the team – don’t worry about that, worry about the kid that’s playing that’s going to devastate teams.

“He gives them mobility. They just need more energy up front. Lukaku has not been at his best. He has earned his chance. He gives them something different and he is a fantastic player. He is on the right trajectory to become something really special for Manchester United.

“He was a massive problem all night and deservedly won man of the match – he was brilliant to watch. When Lukaku and Alexis Sanchez came on, they still had that counter-attack threat and in Rashford, they had the outstanding striker on the pitch.”

It’s no coincidence that Rashford is thriving under Solskjaer as the new boss has given the United players renewed belief and the confidence to go out and play attacking football which was never seen under Mourinho.

It’s obviously working as United have won all four games under Solskjaer – scoring 14 goals in the process – and Rashford has been a key component in their energetic new attack alongside the likes of Anthony Martial and Jesse Lingard.