Tottenham will welcome Chelsea to Wembley on Tuesday for the first leg of their Carabao Cup semi-final. Here is the side we think Pochettino will select

Tottenham will welcome Chelsea to Wembley on Tuesday night for the first leg of their Carabao Cup semi-final.  Here is the side we think Mauricio Pochettino will select for the game:

Goalkeeper: Pochettino has already confirmed Paulo Gazzaniga will keep his place in goal after starting during the FA Cup win over Tranmere on Friday night so Hugo Lloris will once again have the night off.

Defence: However, the Tottenham boss should go with his strongest back four meaning Toby Alderweireld will come in after being rested last time out while Davinson Sanchez is likely to be retained. Jan Vertonghen returned to full training recently but Pochettino says the defender won’t feature against Chelsea as he’s still working his way back to full fitness so Juan Foyth should be named on the bench.

Kieran Trippier is expected to be recalled at right-back with Serge Aurier making way despite scoring against Tranmere while Danny Rose should come in at left-back with Ben Davies given a rest having featured in the FA Cup game.

Midfield: Mousa Dembele is back in training after recovering from an ankle injury but this game comes too soon for the Belgian international. Eric Dier is still working his way back from appendicitis while Victor Wanyama is nursing an on-going knee injury.

Therefore, Tottenham have limited options in midfield so Moussa Sissoko and Harry Winks are expected to be recalled against Chelsea tomorrow having been rested in the FA Cup. Oliver Skipp will make way after an impressive showing against Tranmere.

Attack: Harry Kane was surprisingly called off the bench with Spurs 6-0 up at Tranmere but he still got himself a goal and the England hitman will return to lead the line against Chelsea tomorrow night.

Dele Alli should keep his place in attack while I expect Christian Eriksen will be recalled after being named among the substitutes at Tranmere on Friday evening.

Hueng-min Son will head off to compete at the Asian Cup soon and Pochettino will want to make full use of the attacker while he’s still available so I expect him to start in attack.

Lucas Moura has been ruled out after picking up a knock against Tranmere but Erik Lamela is back in contention after recovering from illness so he’ll be an option from the bench. 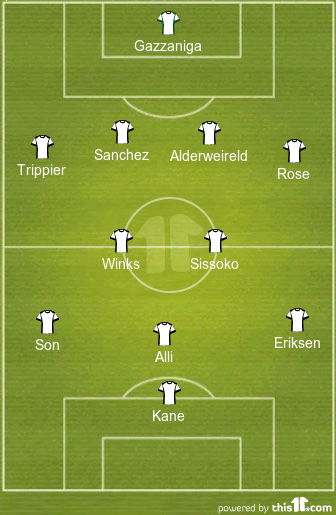