The January transfer window is open and managers are working hard on strengthening their squads and identifying targets for the summer so we’ll keep you up-to-date with the latest rumours. Today, Arsenal are in the race to sign Nicolo Barella…. 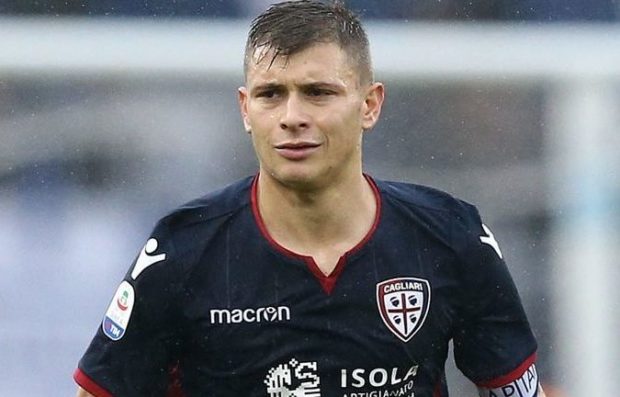 Arsenal are leading Chelsea in the race to sign Cagliari midfielder Nicolo Barella but face further competition from Napoli for his signature, according to reports via the Mirror.

Barella has developed in to one of the most highly-rated young midfielders in Italian football after coming through the Cagliari youth system to become a first team regular last season and he’s been virtually ever-present for Rolando Maran’s side this campaign.

The 21-year-old has also made his mark on the international stage having been capped by the senior Italian national team and his huge potential has alerted clubs here in the Premier League.

Chelsea have been strongly linked with Barella in recent weeks with the Mirror claiming that Maurizio Sarri has identified him as a potential replacement for Cesc Fabregas – who’s expected to complete a move to Monaco.

However, while Ghilda Pensante has confirmed Sarri is a fan of the player, the Sky Italia journalist claims it is in fact Arsenal who are showing the most serious interest from England but they’ll also face stiff competition from Serie A giants Napoli while any deal may have to wait until the summer.

Speaking on the Transfer Talk podcast, Pensante is quoted by the Mirror as saying:

“At present the most likely option for him is to stay with Cagliari until the end of the season, but the closest club to Barella in Serie A is Napoli, who could only close the deal for him in January if Allan leaves them,”

“Sarri at Chelsea really likes the player, but the Premier League club we know has been showing more interest in him is Arsenal.”

I’m sure Chelsea will step-up their pursuit of a new midfielder once Fabregas completes his proposed move, however, any potential deal for Barella won’t come cheap as TransferMarketWeb claim Cagliari want around £45m for their star man.

Unai Emery is hoping to strengthen his squad this month after seeing his squad decimated by injuries while Aaron Ramsey is also expected to complete a move to Juventus so Barella could be viewed as a potential replacement.

The Gunners chief is also being strongly linked with Denis Suarez and the Mirror claim a loan deal is expected to be agreed with Barcelona after president Josep Maria Bartomeu got involved to help smooth negotiations.

The newspaper says Suarez is keen to secure a move to Arsenal this month after struggling to establish himself at the Nou Camp so Emery could be set to launch a double swoop for the Spaniard and Barella over the coming days.