Tottenham take on Fulham at Craven Cottage on Sunday afternoon. Here is the side we think Mauricio Pochettino will select for the game:

Tottenham will be looking to get back to winning ways when they take on Fulham at Craven Cottage on Sunday afternoon. Here is the side we think Mauricio Pochettino will select for the game:

Goalkeeper: Paulo Gazzaniga has impressed whenever he’s been given the opportunity this season but Hugo Lloris is expected to keep the gloves against Fulham on Sunday.

Defence: Due to a lack of options in midfield and attack, we could see Pochettino switching to a back three this weekend. Jan Vertonghen made his long-awaited comeback and looked comfortable against United last week so he should keep his place while Toby Alderweireld is also certain to start once again.

Juan Foyth is pushing for a recall but Davinson Sanchez appears to be ahead of him in the pecking order so I think the Colombian will come in alongside Vertonghen and Alderweirled on Sunday.

Midfield: The switch in formation will see Kieran Trippier moving in to the right wing-back role as he’s expected to keep his place ahead of Serge Aurier but I think we might see a change on the opposite flank with Danny Rose being recalled in place of Ben Davies.

Eric Dier is back in full training after recovering from appendicitis but Pochettino has said he’s only fit enough for a place on the bench against Fulham while Victor Wanyama is still working his way back from a knee injury.

Mousa Dembele has completed his move to China while Moussa Sissoko has been ruled out for two weeks with a groin strain. It was initially reported the Frenchman could miss a month but Tottenham confirmed today Sissoko is expected back in a fortnight.

However, he’ll remain unavailable for the trip across London this weekend so we could see Christian Eriksen deployed in a deeper role alongside Harry Winks at Craven Cottage. Oliver Skipp is another option for Pochettino but I don’t think the Spurs boss will risk the youngster from the start.

Attack: Obviously Tottenham will be without Harry Kane after the striker was ruled out for at least six weeks having suffered an ankle ligament injury during the closing stages of the defeat to Man Utd last weekend.

Kane’s absence will leave a huge void needing to be filled but his injury has come at the worst time for Spurs as Hueng-min Son – who would probably have deputised up front – is away at the Asian Cup.

To make matters worse for Pochettino, Lucas Moura is still out with a knee injury so Tottenham have limited options in attack and it could see Fernando Llorente given a rare start up front this weekend.

Erik Lamela should also get a start while Dele Alli is certain to keep his place but Pochettino will have very few established names to call upon from the bench against Fulham if he wants to freshen things up in attack. 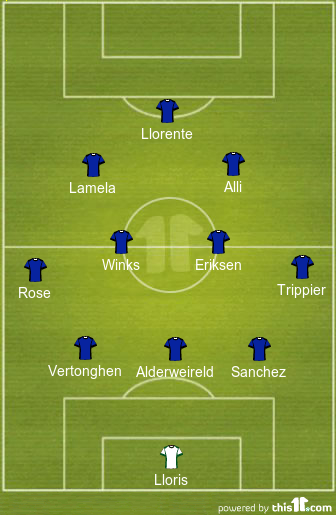