Arsenal welcome Man Utd to the Emirates on Friday in the 4th round of the FA Cup. Here is the side Gooner Mac thinks Unai Emery will select for the game:

Arsenal welcome fierce rivals Manchester United to the Emirates Stadium on Friday night in the 4th round of the FA Cup. Here is the side Gooner Mac thinks Unai Emery will select for the game:

Goalkeeper: The boss is expected to rotate his goalkeepers as Petr Cech started in the previous round and Emery is likely to give the 36-year-old another run out tomorrow so Bernd Leno is set to make way.

Defence: Otherwise, I think Arsenal will field their strongest line-up. Emery started with a back four during the 2-0 win over Chelsea last weekend so he’s expected to stay with that formation against United.

Hector Bellerin is missing after being ruled out for the rest of the season with a knee ligament injury so Emery has a decision to make at right-back. Stephan Lichtsteiner is pushing for a recall but I think the Arsenal boss will give Ainsley Maitland-Niles a chance as the 21-year-old has performed well when called upon.

Sead Kolasinac is expected to retain his place ahead of Nacho Monreal at left-back while we should see Laurent Koscielny continuing alongside Sokratis after his outstanding performance against Chelsea last time out.

Midfield: The diamond midfield worked well against the Blues so we should see Arsenal stick with the same trio in the middle of the park with Granit Xhaka, Lucas Torreira and Matteo Guendouzi all keeping their places.

Attack: Mesut Ozil was once again left on the bench against Chelsea. Emery has suggested the German playmaker has a role to play over the coming weeks but I think we’ll see Ozil among the substitutes against Man Utd tomorrow.

Aaron Ramsey played very well in the advanced midfield role against Chelsea so the Welshman should retain his place against United meaning Ozil will have to settle for a place on the bench.

Pierre-Emerick Aubameyang and Alexandre Lacazette have started up front together in recent games and it’s difficult to see either being left out. Aubameyang missed a few chances against Chelsea but he’s our top scorer and the goals will return if he keeps getting in to goal-scoring positions while Lacazette deserves to start against United after scoring a lovely goal last weekend.

That means Alex Iwobi will once again miss out but he’ll be a decent option from the bench. Henrikh Mkhitaryan is back in light training after recovering from a foot injury but this game will come too soon. 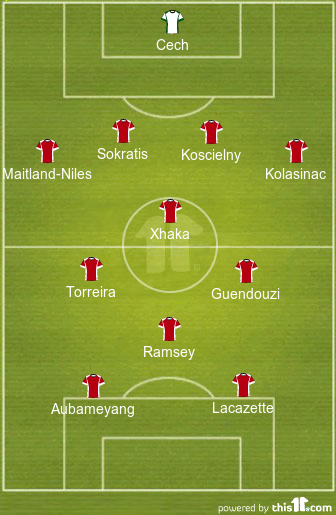