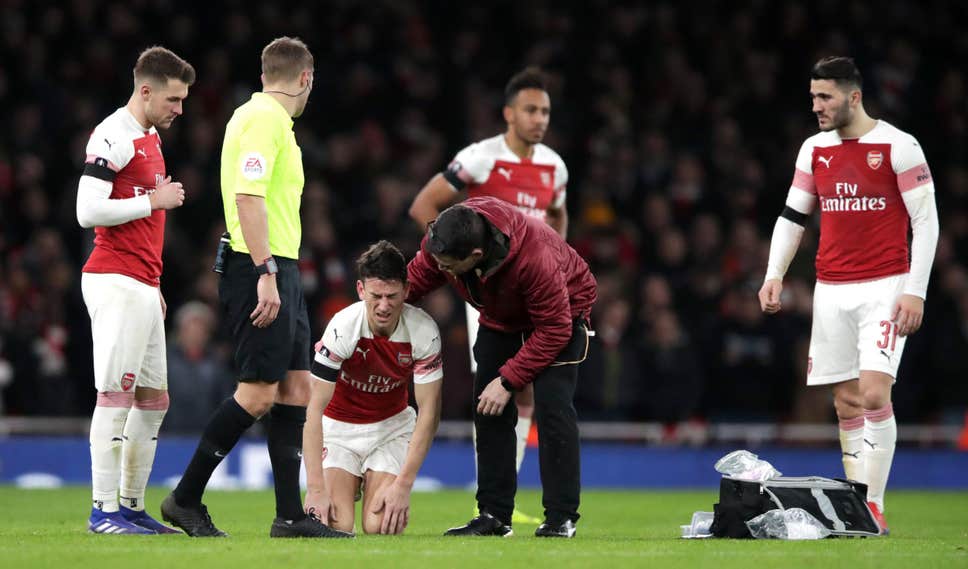 Sokratis was the first to go off as the Greek international twisted his ankle after landing awkwardly midway through the first half. The defender tried to carry on but was in too much discomfort so had to be replaced by Shkodran Mustafi in the 21st minute.

The loss of Sokratis proved pivotal as Arsenal’s defence was ripped apart twice in quick succession just 10 minutes after he left the field with Alexis Sanchez coming back to haunt his former club with the opener before Jesse Lingard made it 2-0.

Arsenal pulled one back just before half-time through Pierre-Emerick Aubameyang and pushed for an equaliser after the break but their momentum was halted after Koscielny needed 8 minutes of treatment midway through the second half.

The Frenchman took an accidental blow to the face from the boot of United striker Romelu Lukaku and was eventually replaced by Mesut Ozil in the 64th minute after lengthy treatment from the Arsenal medical team.

Emery has now provided an update on the defensive duo and while the Gunners boss is hopeful Sokratis’s ankle injury won’t be too serious, he confirmed Koscielny was taken to hospital with a suspected broken jaw.

Emery also said he felt the injuries disrupted Arsenal’s rhythm and contributed to their 3-1 defeat to Man Utd. He told the Evening Standard:

“I think it is not a big injury for Sokratis, his ankle, Laurent Koscielny is going to the hospital to assess and maybe has broken his jaw.

“They [the injuries] don’t help us to be in the match when the result is 1-2, we were in the moment with the chance to level and then go on and win today.

“But these injuries didn’t help because the rhythm goes down and we need to change the players.”

Arsenal will be praying for positive news on Sokratis and Koscielny as the last thing they need is to lose more defenders to serious injury having already lost Hector Bellerin and Rob Holding for the rest of the season with knee ligament injuries.

Emery will have to put-out a make-shift defence for the home clash with Cardiff City on Tuesday night but it would be a disaster for Arsenal if they are without both Sokratis and Koscielny for the trip to Man City next weekend.