This is our match preview ahead of Chelsea’s FA Cup clash with Sheffield Wednesday including team news, expected line-ups and predicted score

Chelsea will look to avoid an upset when they take on Sheffield Wednesday in the 4th round of the FA Cup at Stamford Bridge on Sunday afternoon.

The Blues should be in buoyant mood after beating Tottenham on penalties on Thursday night to book their place in the Carabao Cup final where they’ll meet Manchester City at Wembley next month.

Maurizio Sarri’s men also eased in to the fourth round of the FA Cup with a 2-0 victory over Nottingham Forest three weeks ago and they’ll be hoping to secure their place in the hat for the next phase with another win on home soil tomorrow.

Sheffield Wednesday arrive in West London off the back of consecutive 1-0 victories over Luton and Wigan so interim boss Steve Agnew will be hoping to sign off with a shock result at Chelsea before Steve Bruce takes over.

The Owls sit 17th in the Championship table and their defence has been relatively solid in recent weeks but they know they’ll be in for a stern test against the Blues this weekend.

Chelsea should welcome Ruben Loftus-Cheek back in to the squad after he recovered from a back injury but Alvaro Morata is unlikely to be involved amid speculation linking him with a move to Spain.

Gonzalo Higuain could make his debut after sealing a loan move from Juventus while Andreas Christensen should shake-off a hamstring injury to come in to the defence.

Willy Caballero, Davide Zappacosta, Ethan Ampadu and Callum Hudson-Odoi are all pushing for recalls as Sarri is expected to rest some of his key men.

Wednesday will are set to welcome Fernando Forestieri back from injury but Matt Penney is out with a should injury. 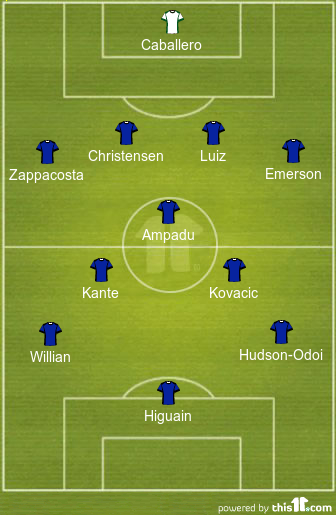 Chelsea 2-0 Sheffield Wednesday: Chelsea have an excellent record against non-Premier League teams in the FA Cup as they’ve progressed from 47 of their 49 ties against lower league opposition. Even with a rotated squad the Blues are still able to put out a side packed with quality and I can see a routine home win tomorrow.