The January transfer window is coming to a close so managers are working hard on strengthening their squads and identifying targets for the summer so we’ll keep you up-to-date with the latest rumours. Today, Tottenham are linked with Carlos Soler…. 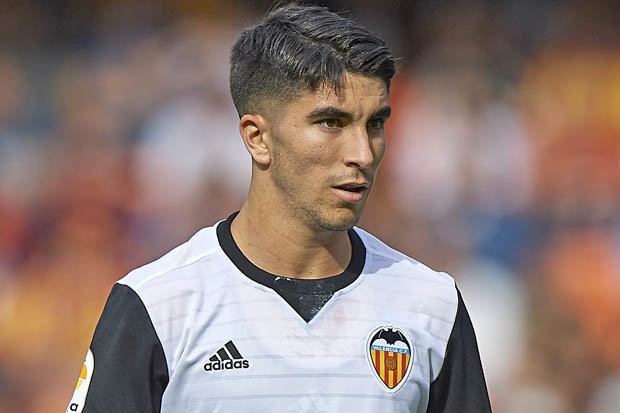 Tottenham are in pole position ahead of Paris Saint-Germain to sign Carlos Soler as Mauricio Pochettino plans a £30m summer swoop for the Valencia midfielder, according to ESPN.

Pochettino failed to sign a single player last summer and admitted this afternoon that any late moves in the winter market are becoming increasingly unlikely at this stage with only around 48 hours to go before the window shuts.

However, the Spurs boss is planning ahead for next summer and a new midfielder is on the agenda as the north Londoners sold Mousa Dembele to Chinese Super League club Guangzhou R&F earlier this month.

A number of players have been linked with a move to Tottenham in recent weeks but ESPN claim Soler has emerged as a prime target for Pochettino and the Argentinean coach is now lining-up a £30m move to sign the midfielder in the summer.

The report says Spurs have sent scouts to watch the 22-year-old on several occasions this season and while PSG are also showing a keen interest, Tottenham are in pole position to land Soler due to their ability to offer him more regular first team football.

The Spanish U21 international has been with Valencia his entire career having joined the club as a child and progressed through the youth ranks before breaking in to the first team set-up in 2016.

He’s now an established first team member with 28 appearances to his name this season and he scored during Valencia’s 2-1 Champions League victory over Manchester United back in December.

Soler is predominantly a right-side midfielder but he’s comfortable playing in the middle of the park so his versatility would be a useful asset for Pochettino if the youngster was to join Tottenham this summer.