Liverpool welcome Leicester City to Anfield on Wednesday night. Here is the team we think Jurgen Klopp will select for the game.

Liverpool will be looking to cement their position at the top of the table with a win when they welcome Leicester City to Anfield on Wednesday night.  Here is the team we think Jurgen Klopp will select:

Goalkeeper: There is no question mark over who’ll start between the sticks for Liverpool tomorrow night as Alisson Becker will keep his place with Simon Mignolet once again on the bench.

Defence: Liverpool have been handed a major boost as Virgil van Dijk is back in full training after recovering from illness and the Dutch international is expected to start against the Foxes on Wednesday night.

Dejan Lovren is back in contention after overcoming a hamstring injury that’s kept him out of the last two games so he could replace Joel Matip while Andrew Robertson is set to start at left-back once again.

Trent Alexander-Arnold is out with a knee injury that he suffered against Brighton earlier this month so with Joe Gomez also on the sidelines and James Milner suspended, Fabinho may be deployed at right-back.

Midfield: If the Brazilian star does start at the back then we may see Klopp switching to a 4-2-3-1 formation again with Jordan Henderson keeping his place in midfield.

Georginio Wijnaldum is back in contention after recovering from a knee injury that kept him out of the win over Crystal Palace last time out so he could replace Naby Keita in the middle of the park.

Attack: A switch in formation could see Xherdan Shaqiri recalled in attack after the Switzerland international was named on the bench during the 4-3 thriller with Palace 10 days ago.

I don’t see Klopp making any other changes to his frontline so we should see Roberto Firmino starting along with Sadio Mane after both players got on the score-sheet against the Eagles.

Mohamed Salah bagged a brace during that win at Anfield and the Egyptian superstar should lead the line up front against Leicester tomorrow night meaning Daniel Sturridge and Divock Origi will have to make do with a places on the bench once again. 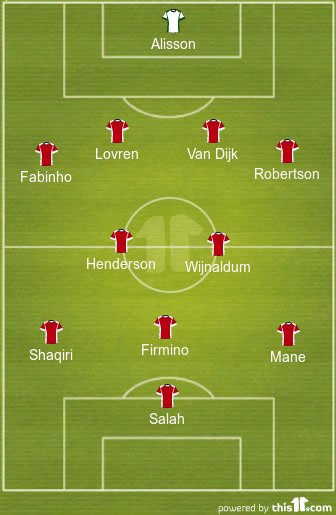