Tottenham will look to put their cup woes behind them when they take on Watford this evening. Here is the side we think Mauricio Pochettino will select

Tottenham will look to put their cup woes behind them and cement their position in the top four with a win over Watford this evening. Here is the side we think Mauricio Pochettino will select for the game:

Goalkeeper: Paulo Gazzaniga has played in the recent cup defeats to Chelsea and Crystal Palace but number one Hugo Lloris will be recalled between the sticks tonight.

Defence: Tottenham are also expected to make changes in defence with Pochettino reverting to a back four. Toby Alderweireld will be recalled after being rested against Palace so he should partner Jan Vertonghen with Davinson Sanchez and Juan Foyth dropping out.

Ben Davies has been ruled out again with a groin injury so Danny Rose should be recalled at left-back with Kyle Walker-Peters making way while Serge Aurier could come in for Kieran Trippier at right-back if Poch wants to freshen things up.

Midfield: Harry Winks is set to be recalled after being named on the bench for the FA Cup defeat at the weekend so youngster Oliver Skipp should make way with Eric Dier keeping his place.

Moussa Sissoko has made a swift recovery from a knee injury that he sustained against Chelsea last week so the Frenchman should come back in to the Tottenham midfield this evening.

Victor Wanyama made his long-awaited comeback from a knee injury at the weekend but he’s going to take plenty of time to get back to top form so a place on the bench is the best he can hope for against Watford.

Attack: Tottenham have been handed a huge boost as Hueng-min Son is back in contention after returning from the Asian Cup. The attacker has only had one training session but I think Pochettino will throw him straight back in to the team as Spurs have limited options up front.

Harry Kane remains out with an ankle injury and Fernando Llorente has failed to impress in recent games so Son could be deployed up front with the Spaniard dropping to the bench.

Dele Alli is also still on the sidelines with a hamstring injury but Christian Eriksen is set for a recall after being rested against Palace while Lucas Moura could get the nod ahead of Erik Lamela in attack. 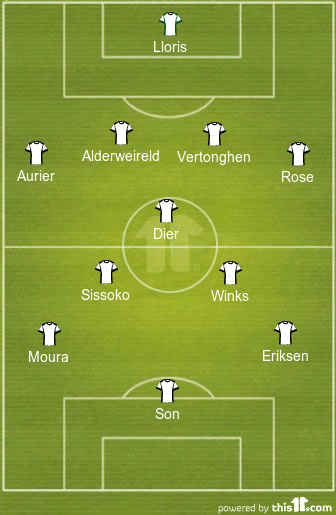