Tottenham take on Newcastle United at Wembley on Saturday lunchtime. Here is the side we think Mauricio Pochettino will select for the game:

Tottenham take on Newcastle United at Wembley on Saturday lunchtime. Here is the side we think Mauricio Pochettino will select for the game:

Goalkeeper: Hugo Lloris was back between the sticks for Wednesday night’s comeback victory over Watford and the Frenchman is expected to retain his place tomorrow so Paulo Gazzaniga will have to make-do with a place on the bench.

Defence: Pochettino went with a back three against the Hornets but I think he may revert to a back four against Newcastle. Toby Alderweireld and Jan Vertonghen should keep their places so Davinson Sanchez is likely to be the man to make way.

Ben Davies remains out again with a groin injury so Danny Rose should retain his place at left-back and Kieran Trippier should come in for Serge Aurier at right-back after being rested in midweek.

Midfield: The change in formation should see Eric Dier recalled after he was given a breather against Watford so the England international is expected to line-up alongside Harry Winks and Moussa Sissoko in the middle of the park.

Victor Wanyama made his long-awaited comeback from a knee injury with a late cameo last weekend but a place on the bench is the best he can hope for tomorrow as he’s still a long way off full fitness.

Attack: Tottenham were boosted by the return of Hueng-min Son on Wednesday night and he put his body on the line to produce a magnificent goal-scoring display. Pochettino has admitted that Son felt the effects of playing so soon after returning from the Asian Cup so he may rest him on the bench against Newcastle.

That would pave the way for Lucas Moura to get a recall as I think he’d be given the nod ahead of Erik Lamela while Christian Eriksen is expected to keep his place in the starting eleven.

Tottenham will once again be without star striker Harry Kane as he’s still working his way back from an ankle injury while Dele Alli remains out with a hamstring problem.

Fernando Llorente was the hero in midweek as he scored a late winner so the Spaniard may keep his place up front against Newcastle this weekend. 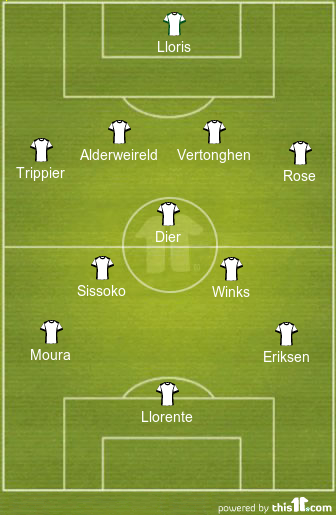