Chelsea take on Huddersfield at Stamford Bridge on Saturday afternoon. Here is the side I think Maurizio Sarri will select for the game:

Chelsea will look to put their disastrous defeat at Bournemouth behind them when they take on Huddersfield at Stamford Bridge on Saturday afternoon.

Maurizio Sarri was furious with his sides second half capitulation at the Vitality Stadium so I’m expecting him to freshen things up tomorrow. Here is the side I think he’ll select for the game:

Goalkeeper: Kepa will have been disappointed to have conceded four goals against Bournemouth but the big-money summer signing will still keep his place ahead of Willy Caballero tomorrow.

Defence: However, we should see changes in defence as Chelsea were all over the place at the back on Wednesday night. David Luiz was particularly poor and I wouldn’t be surprised to see the Brazilian international dropped to the bench with Andreas Christensen coming in alongside Antonio Rudiger.

Cesar Azpilicueta should keep his place at right-back but we may see Marcos Alonso recalled at left-back with Emerson Palmeiri making way having started the last two Chelsea matches.

Midfield: Sarri has been criticised for showing favouritism to Jorginho but the Italian is central to ‘Sarri-ball’ so I don’t see him being axed any time soon. N’Golo Kante may not be playing in his preferred holding role position but the French World Cup winner should still keep his place in the team.

However, Sarri has been rotating Mateo Kovacic and Ross Barkley in recent weeks and it’s the turn of the England international to get a recall so I think we may see Barkley starting against Huddersfield tomorrow afternoon.

Attack: Gonzalo Higuain has looked well off the pace in his two appearances since making a loan move to Chelsea from Juventus but Sarri is confident the South American will improve over the coming weeks once he’s up to speed. Olivier Giroud is pushing for a recall but I think we’ll see Higuain keep his place up front.

Eden Hazard will obviously retain his place in attack and he’ll be looking to end his recent dry spell in front of goal having not found the back of the net in his last five Premier League appearances.

Chelsea are likely to make one change in attack with Willian coming in for Pedro while Callum Hudson-Odoi will be hoping to return to the squad after being left out of the trip to Bournemouth in midweek. 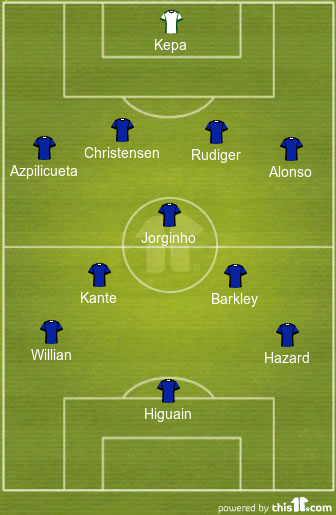