Goalkeeper: Hugo Lloris is almost certain to keep his place between the sticks with Paulo Gazzaniga having to make-do with a place on the bench.

Defence: Jan Vertonghen could be given a rest ahead of Tottenham’s Champions League clash with Borussia Dortmund so Davinson Sanchez may line-up alongside Toby Alderweireld.

Ben Davies remains out with a groin injury so Danny Rose could be recalled at left-back and while Serge Aurier is pushing for a recall at right-back in order to give Kieran Trippier a breather.

Midfield: Eric Dier is set to miss out due to a virus while Victor Wanyama is unlikely to be risked from the start as he’s still working his way back to full match fitness following a serious injury. Therefore, Pochettino has little option to rotate meaning Harry Winks and Moussa Sissoko should continue in the middle of the park.

Attack: Harry Kane is making excellent progress in his recovery from an ankle ligament injury and he should return ahead of schedule but this game still comes too soon. Fernando Llorente made an impact off the bench for Tottenham during the 1-0 win over Newcastle last weekend but I think he may be consigned to a sub role again tomorrow.

Heung-min Son has been outstanding in recent months and has saved Spurs on several occasions recently so I expect the South Korean international to continue up front against Leicester.

Dele Alli remains out with a hamstring injury so Pochettino may go with the same attacking trio of Lucas Moura, Erik Lamela and Christian Eriksen tomorrow afternoon.

Tottenham won’t have too many attacking options to call upon from the bench other than Llorente so they’ll be hoping the starting eleven can get the job done. 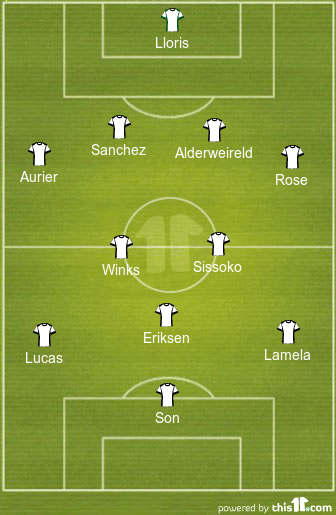