Man Utd welcome PSG to Old Trafford for the first leg of their Champions League clash on Tuesday. Here is the line-up I think Solskjaer will select

Manchester United welcome Paris Saint-Germain to Old Trafford for the first leg of their Champions League last-16 clash on Tuesday night. Here is the line-up I think Ole Gunnar Solskjaer will go with:

Goalkeeper: There is no debate over who’ll start in goal tomorrow night as David De Gea is certain to keep his place between the sticks with Sergio Romero once again among the substitutes.

Defence: Man Utd have been handed a boost as Victor Lindelof is back in contention after returning to full training having missed the win over Fulham on Saturday afternoon with a minor knock. The Swedish international has been a key player under Solskjaer so he’s expected to be recalled against PSG tomorrow.

Chris Smalling and Phil Jones both started at the weekend and kept a clean sheet, however, Solskjaer may bring-in Eric Bailly as his pace would help deal with the threat of Kylian Mbappe up front in the PSG attack. Luke Shaw should keep his place at left-back while Ashley Young is likely to be recalled at right-back with Diogo Dalot making way.

Midfield: I don’t think we’ll see any surprises in midfield as United have fielded a fairly settled trio in the middle of the park since Solskjaer arrived. Nemanja Matic should start in the holding role once again with Ander Herrera also retaining his place.

Paul Pogba has been superb in recent weeks and the French international will be desperate to transfer his goal-scoring form in to the Champions League. Fred will therefore have to make do with a place on the bench.

Attack: Marcus Rashford is set to return after not being risked from the start at Craven Cottage on Saturday due to a dead leg. Romelu Lukaku is expected to drop to the bench with Rashford starting through the middle.

Jesse Lingard was named on the bench against Fulham but Solksjaer has hinted he’ll rotate his squad despite the 3-0 win at the weekend so the England ace is likely to be recalled in attack with Juan Mata making way.

Alexis Sanchez will be pushing for a recall in attack after also being a substitute at Fulham but Anthony Martial scored a superb goal in west London so he’ll be hoping he’s done enough to keep his place on the left wing. 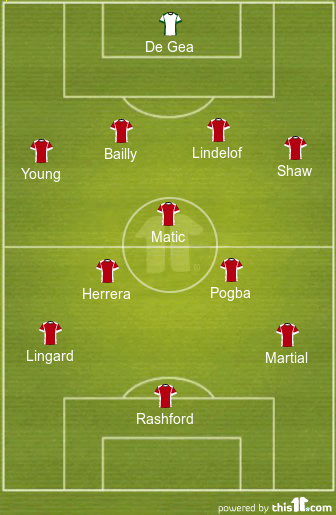