Chelsea will look to bring home a positive result from the first leg of their Europa League last-32 tie with Malmo on Thursday night. Here is the side I think Maurizio Sarri will select for the game:

Goalkeeper: Kepa Arrizabalaga will have been hugely disappointed to concede 6 goals against Manchester City at the weekend and the Spaniard may get the night off tomorrow with Willy Caballero coming in between the sticks.

Defence: Sarri is expected to make plenty of changes following the humiliation at the Etihad Stadium and he could continue with his policy of playing a weakened side in Europe – especially with a huge FA Cup clash with Manchester United coming up.

Marcos Alonso hasn’t travelled so Emerson Palmeiri is set to start at left-back while Davide Zappacosta should come in for Cesc Azpilicueta on the right. Andreas Christensen is likely to be recalled in the middle of the back four with David Luiz given a rest meaning Antonio Rudiger could keep his place.

Midfield: Chelsea should make a couple of changes in midfield with Jorginho given a breather ahead of the Man Utd game. Ethan Ampadu could come in to the holding role having played in that position at times in the Europa League this season.

Mateo Kovacic is expected to be recalled after being named on the bench against City meaning Ross Barkley could make way but N’Golo Kante may keep his place in the middle of the park as Ruben Loftus-Cheek has been ruled out with a back injury.

Attack: We should see plenty of changes in the Chelsea attack with Eden Hazard given the night off so Callum Hudson-Odoi could be given a chance to impress with the 18-year-old starting on the wing tomorrow night.

Gonzalo Higuain may also get a breather after a disappointing game against City so Olivier Giroud is pushing to start up front after starting just one of Chelsea’s last seven games in all competitions.

Sarri could freshen up his entire front three against Malmo with Pedro dropping out and Willian coming in to line-up along with Hudson-Odoi and Giroud after being on the bench at the weekend. 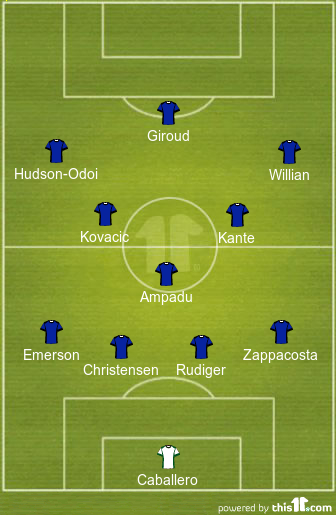