Liverpool take on Manchester United at Old Trafford on Sunday afternoon. Here is the team we think Jurgen Klopp will select:

Liverpool will be looking to move three points clear at the top of the table with a win over Manchester United at Old Trafford on Sunday afternoon. Here is the team we think Jurgen Klopp will select:

Goalkeeper: There is no debate over who will start in goal against United as Alisson Becker is certain to keep his place between the sticks with Simon Mignolet once again on the bench.

Defence: Liverpool welcome Virgil van Dijk back in to the squad after he served a one-game suspension during the 0-0 draw with Bayern Munich in midweek and the Dutchman is certain to be recalled to the starting eleven. Fabinho deputised superbly in the Champions League clash but I think he’ll be the man to make way.

Dejan Lovren is set to once again miss out with a hamstring injury while Joe Gomez is still working his way back to full fitness from a fractured leg that’s kept him on the sidelines since December so Joel Matip is expected to start alongside van Dijk.

I don’t think we’ll see any changes in the full-back positions for Liverpool so Andrew Robertson should continue at left-back while Trent Alexander-Arnold should start on the right after making a successful return to action from a knee injury.

Midfield: Fabinho is free to move back in to the defensive midfield role and I think he’ll be given the nod against Man Utd ahead of Jordan Henderson despite the Liverpool skipper playing well in midweek.

James Milner is pushing for a recall after being named on the bench against Bayern and Klopp may want the hard working midfielder to keep a close eye on Paul Pogba. Georginio Wijnaldum is likely to keep his place so Naby Keita could make way.

Attack: Roberto Firmino was able to shake-off a virus to start against Bayern so the South American should be fine to keep his place up front against United this weekend meaning Daniel Sturridge will once again have to make-do with a place on the bench.

Mohamed Salah will have been hugely disappointed with his performance in midweek but the Egyptian international is certain to keep his place in attack so he’ll be looking to bounce back with an improved display against United.

I don’t think Klopp will alter what has been his preferred Liverpool attack for some time so Sadio Mane should start alongside Fimrino and Salah with Xherdan Shaqiri and Divock Origi having to make-do with a place on the bench. 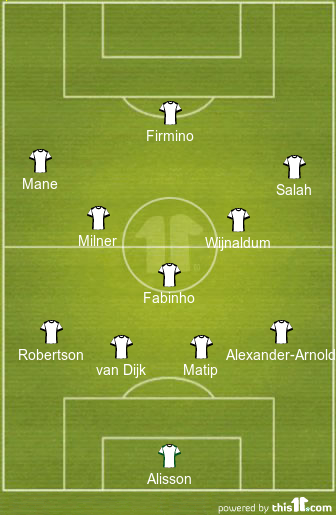