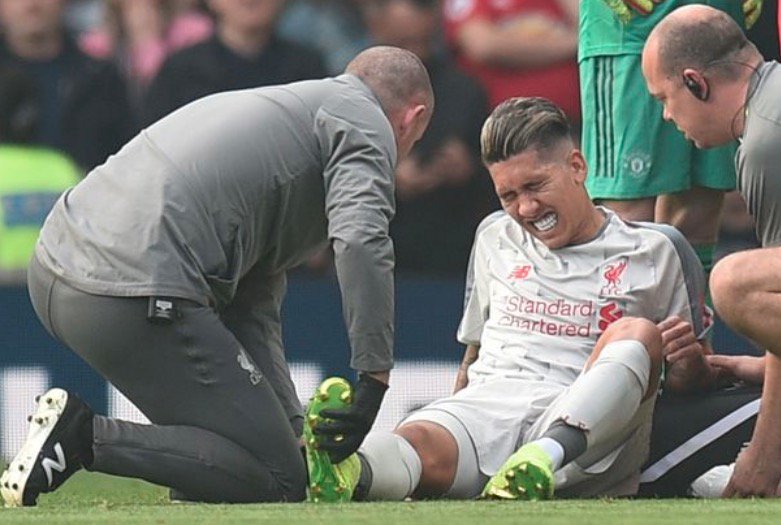 Firmino started up front for Liverpool yesterday with the Brazilian international once again supported by Mohamed Salah and Sadio Mane in attack as the Reds looked to move three points clear of Manchester City with a win at Old Trafford.

However, Firmino was one of several players to suffer an injury during a hard-fought opening forty-five minutes with the South American needing treatment from the Liverpool medical team midway through the first half.

The 27-year-old tried to continue and run-off the injury but he was clearly in too much discomfort so Firmino was eventually replaced by Daniel Sturridge in the 31st minute.

Speaking after the 0-0 draw, Klopp told Liverpoolfc.com that the striker suffered an ankle injury against Man Utd but says it’s too soon to know precisely how long he’ll be on the sidelines for.

However, Klopp is hopeful Firmino won’t be out for too long as the forward is usually a quick healer. He told Liverpoolfc.com:

“Unfortunately, I have no clue. It was something with the ankle, that’s for sure.

“Bobby said at first he could carry on but then he showed it didn’t work.

“I don’t know exactly; it is Bobby, so it will be quicker than with all the others but first we have to know what it is exactly – and we don’t know at the moment.”

We’ll have to wait and see how long Firmino is ruled out for once he’s further assessed and the full extent of the injury is known but Liverpool will be praying for positive news.

Firmino has been a regular in Klopp’s attack once again this season and it would be a huge blow to their title hopes if he was to be sidelined during a key period of the season.

The striker is now a major doubt for Watford’s trip to Anfield on Wednesday night so Sturridge will be on stand-by to deputise up front as Liverpool look to cement their position at the top of the table with a win over the Hornets.