Chelsea take on Tottenham at Stamford Bridge on Wednesday night. Here is the side I think Maurizio Sarri will select for the game:

Chelsea will need to get over their Carabao Cup final disappointment quickly when they take on Tottenham at Stamford Bridge on Wednesday night. Here is the side I think Maurizio Sarri will select for the game:

Goalkeeper: All eyes will be on Sarri to see whether he stands by Kepa Arrizabalaga or axes his number one following the bizarre incident on Sunday afternoon. Many pundits say Kepa shouldn’t play for the club again this season after refusing to be substituted but Sarri has suggested the misunderstanding has been dealt with and they’ve moved on. I think it would be difficult to see a way back for Kepa if he was dropped tomorrow so I think Chelsea will stick by their huge-money summer signing.

Defence: Sarri is unlikely to make any changes in defence after the Blues managed to prevent Manchester City from scoring over 120 minutes at Wembley on Sunday. Andreas Christensen is pushing for a recall but I think we’ll see Chelsea go with Antonio Rudiger alongside David Luiz in the middle of the back four against Spurs.

Marcos Alonso wasn’t included in the squad on Sunday so he’ll be hoping for a recall but Emerson Palmeiri has performed well at left-back in his absence so I think we’ll see him keep his place tomorrow with skipper Cesar Azpilicueta once again starting at right-back ahead of Davide Zappacosta.

Midfield: Jorginho is certain to keep his place as he’s a focal point in Sarri’s system while N’Golo Kante is also expected to retain his place in midfield – despite not playing in his preferred holding role.

However, Chelsea could make a change in midfield with Mateo Kovacic pushing for a recall after being named on the bench against City. Ross Barkley could therefore drop out against Tottenham and join Ruben Loftus-Cheek on the bench.

Attack: Chelsea played with Eden Hazard as a ‘false 9’ against City in the League Cup final but I think we’ll see Sarri move the Belgian international back to the wing with Gonzalo Higuain being recalled up front after being named as a substitute on Sunday.

Callum Hudson-Odoi will be hoping to feature at some point but I think a place on the bench is the best he can hope for with Pedro keeping his place in attack ahead of Willian against Spurs.

The only fitness doubts for Sarri are Zappacosta with the flu, Danny Drinkwater is still carrying a tendon injury while Gary Cahill is nursing a back injury but none of the trio would have started tomorrow even if fit. 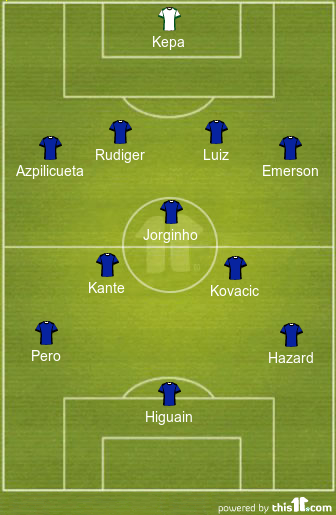