Tottenham take on Arsenal at Wembley on Saturday lunchtime. Here is the side we think Mauricio Pochettino will select for the game:

Tottenham will be desperate to get back to winning ways when they take on Arsenal at Wembley on Saturday lunchtime. Here is the side we think Mauricio Pochettino will select for the game:

Goalkeeper: Fingers were pointed at Hugo Lloris for his part in both Chelsea goals on Wednesday night and no doubt the Frenchman will have been disappointed with his contribution at Stamford Bridge. However, I don’t see Pochettino dropping his captain so Lloris should continue between the sticks against Arsenal.

Defence: Tottenham switched to a back four against Chelsea after Jan Vertonghen was ruled out of the game with a hip injury but the Belgian international is expected to return this weekend which could see Poch reverting to a back three/five. Vertonghen should slot-in alongside Toby Alderweireld and Davinson Sanchez with Juan Foyth having to make-do with a place on the bench.

We could see some changes in the wing-back positions with Danny Rose expected to be recalled on the left meaning Ben Davies will make way. Kieran Trippier may also be left out following his horror own goal against Chelsea on Wednesday night with Serge Aurier recalled on the right against Arsenal.

Midfield: Eric Dier remains a major doubt for the north London derby after missing the trip to Stamford Bridge last night with tonsillitis while Victor Wanyama isn’t back to his best form just yet having struggled with a knee injury this season.

Oliver Skipp is an option but I don’t see Pochettino throwing the youngster in to the heat of a NLD so I think we’ll see Harry Winks and Moussa Sissoko once again in the middle of the park this weekend.

Attack: Tottenham have been handed a huge boost as Harry Kane won’t be facing any retrospective action from the FA despite appearing to aim a headbutt at Chelsea defender Cesar Azpilicueta on Wednesday night. A ban would have seen the striker miss the Arsenal clash but the referee included the incident in his match report meaning Kane is free to keep his place up front.

Dele Alli remains on the sidelines with a hamstring injury so he misses out once again. Christian Eriksen looked jaded against Chelsea but with Alli stillout, I don’t think Pochettino can afford to give the Dane a rest against Arsenal.

Hueng-min Son is expected to keep his place as the South Korean has enjoyed a superb campaign so I think we’ll see Eriksen and Son supporting Kane in attack with Erik Lamela, Lucas Moura and Fernando Llorente on the bench. 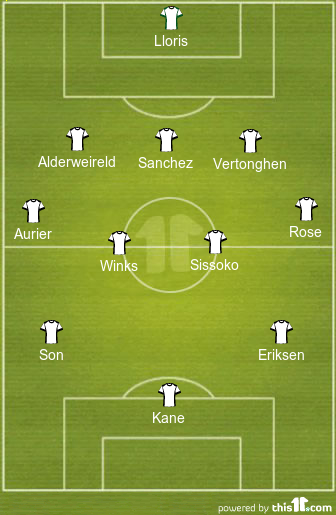