Tottenham take on Borussia Dortmund in Germany this evening. Here is the side we think Mauricio Pochettino will select for the game:

Tottenham will be looking to finish the job and book their place in the quarter finals of the Champions League when they take on Borussia Dortmund in Germany this evening. Here is the side we think Mauricio Pochettino will select for the game:

Goalkeeper: Hugo Lloris is almost certain to retain his place in goal this evening as Pochettino is highly unlikely to change his goalkeepers for such an important game so Paulo Gazzaniga will have to make-do with a place on the bench again.

Defence: Tottenham are expected to stick with a back three/five as they look to protect their 3-0 first leg lead with Toby Alderweireld and Jan Vertonghen likely to keep their places in the defence. Davinson Sanchez was at fault for Arsenal’s goal on Saturday and he also gave away a late penalty but I still think he’ll keep his place ahead of Juan Foyth this evening.

We’re certain to see a change in the right wing-back position as Kieran Trippier has been left back in north London so Serge Aurier is set for a recall while Ben Davies is expected to replace Danny Rose in the left wing-back slot.

Midfield: Tottenham have been handed a double boost with Harry Winks and Eric Dier both making the trip to Germany. Winks missed the draw with Arsenal with a minor hip injury but took part in full training yesterday so should be passed fit to return in midfield.

Dier has missed the last five matches due to a bout of tonsillitis so he may not be deemed match fit just yet, therefore, a place on the bench is likely for the England international with Moussa Sissoko keeping his place in the middle of the park. That means Victor Wanyama will be the man to make way for Winks as he didn’t look 100% match fit at the weekend following an injury plagued few months.

Attack: Dele Alli is edging closer to making his return from a hamstring injury but the Dortmund game will come too soon so he has stayed back in north London to continue to work on his fitness.

Tottenham may decide to freshen things up in attack with Lucas Moura pushing for a recall so the Brazilian international could replace Hueng-min Son – who deserves a well-earned rest after a hectic couple of months.

Christian Eriksen should keep his place so Erik Lamela may have to make-do with a place among the subs while Harry Kane is certain to lead the line up front once again with Fernando Llorente named on the bench. 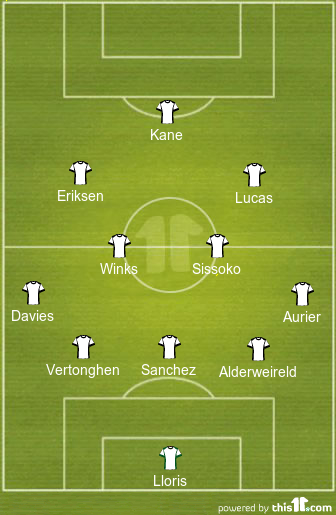