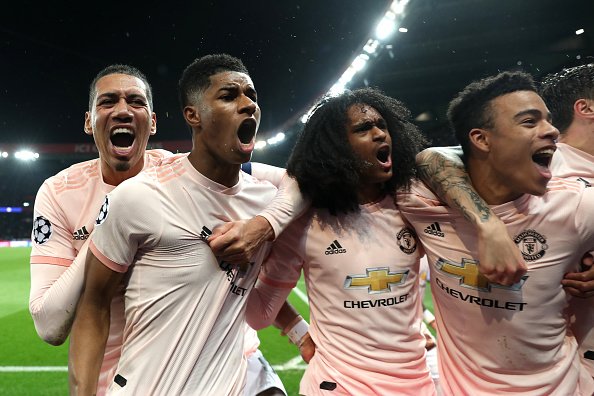 Manchester United pulled off an incredible comeback as Marcus Rashford scored a stoppage time penalty to secure a famous 3-1 win over PSG to progress to the quarter-finals of the Champions League on away goals.

It was a dream start for United as they grabbed a goal inside the opening two minutes when Romelu Lukaku pounced on a slack back-pass from Thilo Kehrer to round Gigi Buffon and slide home from a tight angle to make it 0-1 on the night and 2-1 on aggregate.

The hosts responded and levelled things up in the 12th minute as Eric Bailly failed to pick-up Juan Bernat at the back post and the full-back tapped home from a Kylian Mbappe pass to make it 1-1 and 3-1 overall.

PSG were dominating possession but United then got themselves back in the game once again midway through the first half.  Rashford tried a speculative effort from 25-yards which should have been easily saved by Buffon but the experienced stopper spilled it straight to Lukaku who tapped home for 2-1 in the 30th minute.

The French champions saw a goal correctly ruled out for offside in the second half while Bernat hit the post late on as PSG looked to wrap-up the tie, however, there was to be late, late drama.

A long-range Diogo Dalot shot deflected off Kimpembe in the first minute of stoppage time and the referee initially signalled for a corner. However, replay’s showed it had struck the defender’s arm and after watching the incident back on the touchline TV, the ref pointed to the spot. Rashford stepped up and slammed home the resulting penalty to make it 1-3 on the night and 3-3 on aggregate meaning United were suddenly going through on away goals.

PSG couldn’t find another goal as United held on to secure a dramatic victory to book their place in the quarter finals of the Champions League for the first time since 2014.