Tottenham take on Southampton at St Mary’s on Saturday. Here is the side we think Mauricio Pochettino will select for the game:

Tottenham will be looking to get back to winning ways in the Premier League when they take on Southampton at St Mary’s on Saturday. Here is the side we think Mauricio Pochettino will select for the game:

Goalkeeper: Hugo Lloris produced some excellent saves to keep Borussia Dortmund at bay during Tottenham’s Champions League win on Tuesday night and the Frenchman is certain to keep his place this weekend so Paulo Gazzaniga will have to make-do with a place on the bench.

Defence: Tottenham have deployed a back three/five in recent games and Pochettino could stick with that formation against Southampton this weekend with Jan Vertonghen and Toby Alderweireld expected to keep their places. However, we may see one change if Pochettino wants to freshen things up with Juan Foyth replacing Davinson Sanchez.

Kieran Trippier faces a late check after missing the Dortmund game with an abdominal problem. If the England international is ruled out then Serge Aurier should continue on the right with Danny Rose expected to be recalled in place of Ben Davies on the left.

Midfield: Tottenham have been handed another injury concern in midfield as Harry Winks aggravated a hip injury during the win over Dortmund and is expected to miss the trip to St Mary’s on Saturday afternoon.

Thankfully for Spurs, Eric Dier made his return to the bench in midweek after missing five games with tonsillitis and he could now be recalled to the starting eleven this weekend. Moussa Sissoko should keep his place meaning Victor Wanyama may have to make-do with a place on the bench against his former club.

Attack: Tottenham are set to be handed a huge boost with Dele Alli being tipped to return to the squad on Saturday after recovering from a hamstring injury. However, after missing the last ten matches, the attacking midfielder may be eased back in to action from the bench.

Christian Eriksen and Hueng-min Son have started together in the past eight matches in all competitions so surely Pochettino has to think about giving at least one of the attacking duo a rest. The Southampton game may be a good opportunity with Lucas Moura and Erik Lamela pushing for recalls.

Harry Kane was the hero once again in midweek as he scored the winner against Dortmund and he should lead the line up front once again meaning Fernando Llorente will have to make do with a place on the bench. 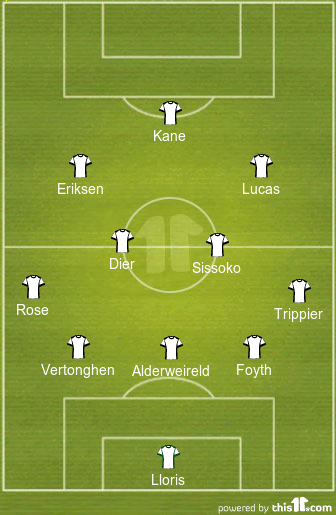